Skip to main content
In the News
This article is reposted from
Middle East Eye
, click here to read the original article. 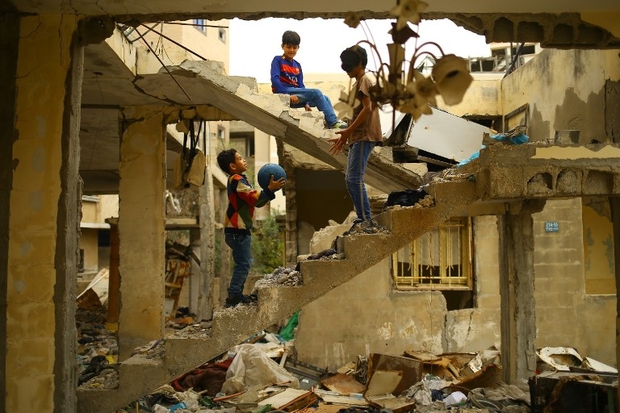 Palestinian children play amidst the ruins of a building destroyed during the 50-day war Israel waged on Gaza in the summer of 2014 in Gaza City, on April 13, 2014 (AFP)

British high street banks including HSBC and Barclays are a "crucial link in the chain" of Palestinian oppression as they invest in and loan money to companies who supply arms to Israel, a campaign group has claimed in a report.

The "Deadly Investments" report by War on Want explores the business relationship between the UK’s financial sector and 19 companies which supply Israel with weapons and technology it says are used against Palestinians.

"The deadly trade of arms is facilitated not only by the UK government," it claims. "UK banks and financial institutions participate in Israel's militarised repression by holding shares in companies that sell military technology and weapons to Israel, and by providing and facilitating loans to companies producing such military technology and weapons."

"Our findings show that UK banks and other financial actors facilitate and profit from Israel’s militarism, making them complicit in Israel's crimes against the Palestinian people."

The report comes on the back of the release of guidance by the UN High Commissioner for Human Rights last month, clarifying that banks and financial institutions have a responsibility to "avoid causing or contributing to adverse human rights impacts" and "prevent or mitigate adverse human rights impacts that are directly linked to their operations, products or services by their business relationships".

The report said the banks in question hold shares worth more than £10.8bn ($13.9bn) in military and technology companies such as BAE Systems, General Electric and Lockheed Martin.

War on Want used the Orbis database, a commercial financial database, and the nasdaq.com website to produce the report.

According to the group, HSBC owns shares worth more than £831m ($1.07bn) in firms that provide arms and technology to Israel, including £180m ($232m) of shares in BAE Systems, which manufactures the target selection displays in F-16 fighter jets used by Israel in its 2014 assault on Gaza.

HSBC is also said to own £102m ($131.4) of shares in Boeing, the US company that provides Israel with Apache helicopters and Hellfire missiles.

The British high street bank also has significant investments in Caterpillar, whose specially modified bulldozers are used to demolish Palestinian homes, and in Raytheon, whose "bunker buster" bombs were used by Israel to target civilian homes during the 2014 assault on Gaza.

HSBC in 2010 published its ethical guidelines for investments in the defence industry. It said that while it does not invest in any company that manufactures cluster bombs or anti-personnel mines, it does provide financial services to customers who sell or manufacture weapons among other business.

HSBC told War on Want that it holds shares in arms companies on behalf of clients, but did not say which investments these were.

It also referred War on Want to its Defence Equipment Sector Policy which said that "HSBC decided in 2000 to withdraw progressively from the financing of the manufacture and sale of weapons".

British financial institutions have also been providing or arranging syndicated loans that run into the billions for companies that sell arms and technology to Israel.

Syndicated loans are provided to a borrower by a group of lenders, where the financial institution or bank can manage the syndicate, act as a lender, or both.

Barclays alone participated in 29 such loans totalling £41.1bn ($53bn) to firms including American aerospace company Lockheed Martin, which is in the process of delivering 50 F-35 jets to Israel, and Northrup Grumman, which built three Saar V missile ships used by the Israeli navy to police the coast of Gaza.

According to the report, HBSC participated in 15 syndicated loans totaling £19.3bn ($25bn) which went to several companies including British manufacturer Rolls-Royce.

"Banks like HSBC are a crucial link in the chain of oppression, facilitating and profiting from the brutal military repression of Palestinians.

“War on Want is calling for banks to divest from, and stop facilitating loans to, companies that sell weapons and security services to Israel.

"We also repeat our call for the UK government to implement a two-way arms embargo on Israel.”

The campaign group, which has been a stalwart advocate of the BDS movement and has called for a two-way arms embargo with Israel until it complies with international law, suggests that some of the companies mentioned could be criminally liable for complicity.

"A company that facilitates the violation of international law by, for example, providing weapons to a government that uses them to carry out war crimes, may be criminally complicit with that crime."

The UN Human Rights Council has repeatedly called on companies to stop all business involvement in Israel’s illegal settlements and voted to create a database of companies that are involved in supporting and facilitating settlement activity in 2016.

With the release of the report coinciding with 50 years of Israel’s military occupation of the West Bank, Gaza Strip and Golan Heights, and 10 years since the continuing blockade of the Gaza Strip began, the report said: "The impacts of the occupation and siege on Palestinians have been devastating, an ever-intensifying system of human rights abuse and imposed poverty on millions of Palestinians.”

2017 also marks 100 years since the Balfour Declaration which declared British support for a Jewish homeland in Palestine.

In a statement to MEE, HSBC said it had "progressively withdrawn from financing the manufacture and sale of defence equipment".

"We believe that our policy, which is reviewed regularly, is one of the most restrictive in the financial services industry," said Francis Sullivan, European regional head of sustainability.

"We value the work carried out by NGOs such as War on Want and we have sought to meet with them to understand their specific concerns.”