Tell the Netherlands: Exclude CAF from your rolling stock tender!

March 29, 2021
Companies like CAF, that are complicit in Israel’s violations of international law, should not be rewarded with lucrative government contracts 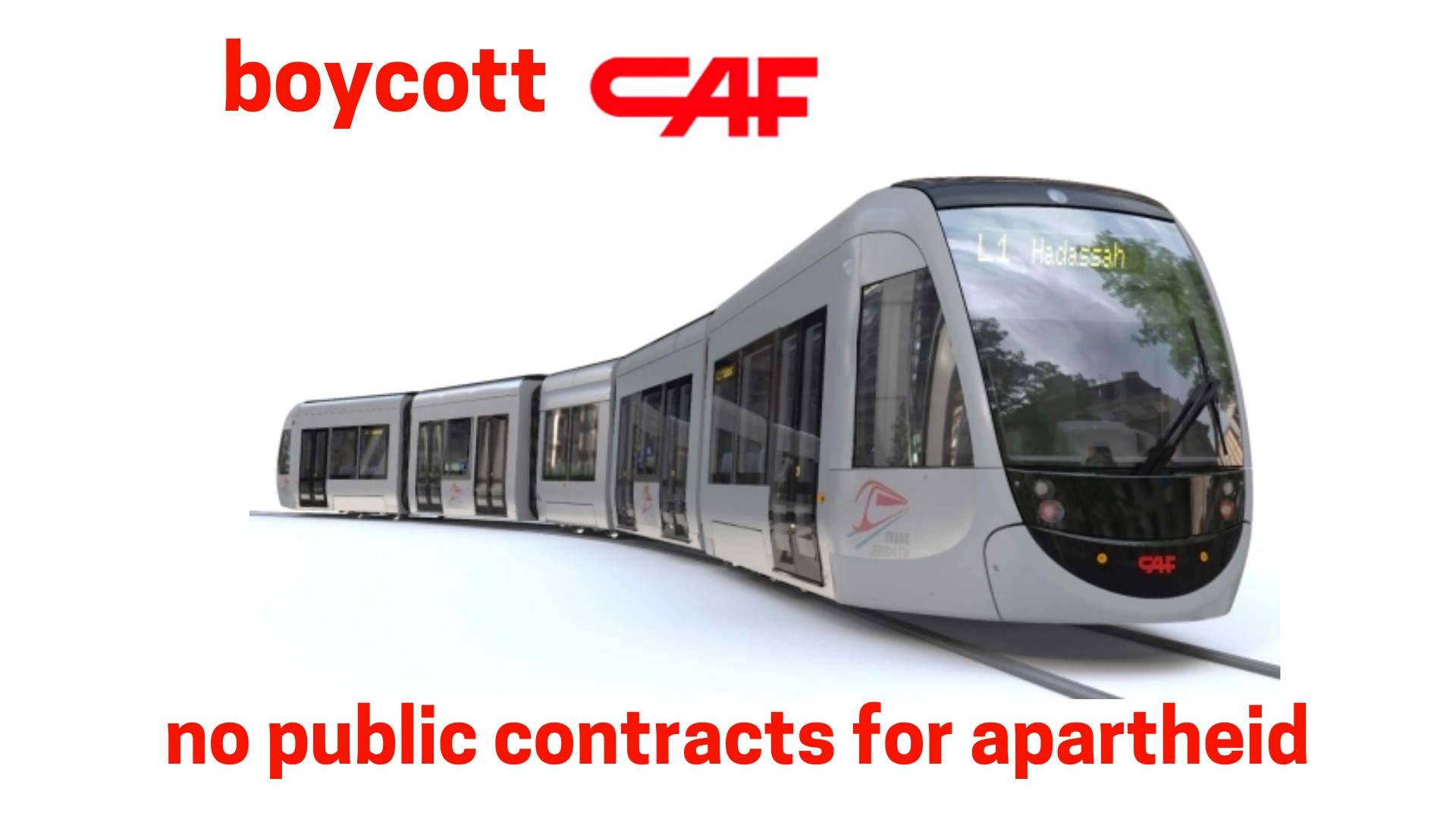 Dutch human rights organisations are aware of existing contracts in the Netherlands involving Construcciones y Auxiliar de Ferrocarriles (CAF). In 2018, the GVB, the public transport company of the municipality of Amsterdam, chose CAF for the supply of metro carriages and trams. Also in 2018, CAF secured a contract for the major Dutch railway company Nederlandse Spoorwegen (NS) to supply sprinter train carriages. CAF supplies trams to the Public Transport in Utrecht as well.

CAF will most likely apply for future contracts in the Netherlands.

Dutch authorities should be aware that CAF is involved in Israel’s grave violations of international law in the occupied Palestinian territory and must therefore exclude CAF from future tenders/contracts.

Tell Dutch public transport companies to exclude CAF from all future tenders/contracts until it ends its role in Israeli apartheid!

In August 2019, a consortium led by CAF, along with the Israeli company Shapir, was selected to lead the expansion of the Jerusalem Light Railway (JLR).  Shapir is listed in the UN database of companies involved in Israel’s illegal settlement enterprise in the occupied Palestinian territory. The JLR serves illegal Israeli settlements in and around occupied East Jerusalem, therefore contributing to cementing Israel’s grip on occupied Palestinian land.

Every illegal Israeli settlement, built on land stolen from the Palestinian -- or Syrian -- people, is considered a war crime under the Fourth Geneva Convention.

Thirty one prominent human rights organisations, networks and trade unions from Palestine and Europe have submitted a report to the Office of the United Nations High Commissioner for Human Rights (OHCHR) in Geneva, demanding that CAF be included in the UN database of businesses complicit in Israel’s illegal settlement enterprise.

Through their role in leading the development of the Jerusalem Light Railway (JLR), an Israeli project that serves Israel’s illegal settlements in the occupied Palestinian territory (OPT), Construcciones y Auxiliar de Ferrocarriles (CAF) support Israel’s war crimes and dispossession of the Palestinian people. They should not be rewarded for their complicity in such grave violations of international law.

I urge you to exclude CAF, which already has several contracts in the Netherlands, from any future tenders/contracts.

In addition, Shapir, which is in consortium with CAF to expand the JLR, is listed in the UN database of companies that are complicit in Israel’s illegal settlement enterprise, a war crime under international law.

“European public institutions, CAF’s main clients, can and should exclude CAF from tenders and contracts because of its involvement in gross human rights abuses through its business with Israel’s illegal Jerusalem Light Rail project.”

Every illegal Israeli settlement, built on land stolen from the Palestinian -- or Syrian -- people, is considered a war crime under the Fourth Geneva Convention. While Israeli settlements in East Jerusalem expand, Palestinian neighbourhoods face a series of existential threats, including restrictions on building, relentless forced displacement and settler violence. The JLR therefore aids Israel’s systematic discrimination against Palestinian residents of the city.

CAF’s own workers have repeatedly called on the company to relinquish involvement in the JLR, with the workers council in Beasain and two unions in Zaragoza, representing workers who would build equipment for the JLR, demanding CAF withdraw from the project because it is a “colonial criminal act against the state of Palestine.” Eight Norwegian trade unions are calling for the exclusion of CAF from public tenders/contracts.

As the Israeli government plans to formally annex large swathes of illegally occupied Palestinian land in the West Bank, and as it escalates its ongoing de facto annexation, it is imperative that no Dutch authority provides contracts to CAF or to other companies whose business activities facilitate Israel’s illegal settlements and its dispossession of the Palestinian people.

Doing so would violate the Dutch government’s own obligations to not recognize as lawful or assist  serious violations of international law, and to ensure that businesses within its jurisdiction respect human rights in the Netherlands and abroad.

I therefore call on you to release a public statement confirming the exclusion of CAF and any other company listed in the UN database from any future public contracts.