Radiohead: Do not lend your voice and art to oppression

March 5, 2017
/ By
Palestinian Campaign for the Academic and Cultural Boycott of Israel
/
UK 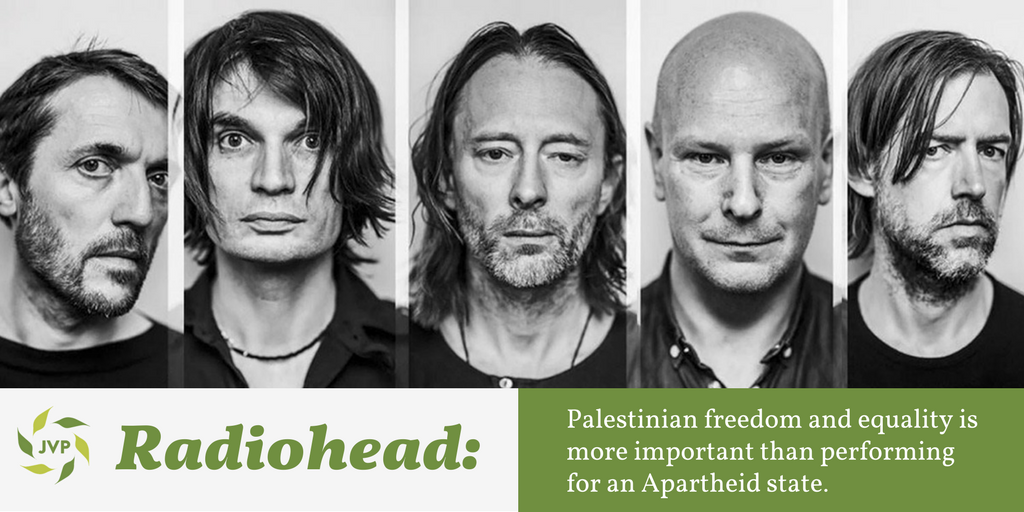 Re: Your July concert in Tel Aviv

Do not lend your voice and art to oppression

We, as Palestinian artists and cultural institutions, appeal to you to cancel your upcoming concert in Tel Aviv in July, as such a performance, irrespective of intentions, will help Israel’s regime of occupation and apartheid cover up its massive violations of Palestinian human rights.

Borrowing a page from the propaganda book of apartheid South Africa, Israel makes no secret of its manipulation of culture  to promote an image of “democracy” and “cultural diversity.”

In 2009, Arye Mekel, from Israel’s Foreign Ministry noted that “We will send well-known novelists and writers overseas, theatre companies, exhibits. This way, you show Israel’s prettier face, so we are not thought of purely in the context of war.”

Similarly, Nissim Ben-Sheetrit has vocally expressed that culture for Israel is a propaganda tool stating: “We are seeing culture as a hasbara [propaganda] tool of the first rank, and I do not differentiate between hasbara and culture.”

Recognizing Israel’s not-so-hidden agenda behind inviting cultural and sports figures, American football player Michael Bennett of the Seattle Seahawks and five other NFL players have recently cancelled their participation in an Israeli government-sponsored propaganda trip. Expressing his support for Palestinians, Bennett refuses to be “used,” as he put it. He cited the 1968 Olympian John Carlos, who said, “There is no partial commitment to justice. You are either in or you’re out.” Bennett wrote, “Well, I’m in.”

We urge you to be “in” too. Do not lend your good name and integrity to an intricate propaganda machine whose main aim is to “show Israel’s prettier face.”

Just as South Africans called for boycotts -- including cultural -- during the apartheid era, Palestinians have since 2004 urged renowned artists like yourself to not entertain yet another apartheid in our time.

Just a day before the harrowing murder of Palestinian teenager Muhammed Abu Khdeir, then Israeli Justice Minister Ayalet Shaked posted on Facebook a call for the killing of Palestinians saying that “the entire Palestinian people is the enemy” continuing to state “including its elderly and its women, its cities and its villages, its property and its infrastructure.”

More than 1,200 cultural figures in the UK, in fact, have signed a pledge “to accept neither professional invitations to Israel, nor funding from any institutions linked to its government until it complies with international law and universal principles of human rights.” Many bands and artists have also cancelled performances in Tel Aviv, such as Lauryn Hill and Massive Attack.

As it says in the video of your song All I Need, “some things cost more than you realize.” Your performance in Tel Aviv will cost us dearly as it will help to prolong Israel’s decades-old occupation, colonization, and entrenched system of apartheid that denies us our equal rights by law, not just policy.

Just after the UN Security Council reiterated the illegality of Israeli settlements under resolution 2334, on 23 December 2016, Israel  passed a law that would retroactively legalize the theft of private Palestinian land for settlements. Israel cannot maintain this level of criminal impunity and colonial arrogance without the facade of “democracy” that international performers help to polish.

We sincerely hope that you shall reconsider your performance and join the growing ranks of artists who stand on the right side of history, with the oppressed in their struggle to end oppression.

Radiohead
March 5, 2017
/ By
Palestinian Campaign for the Academic and Cultural Boycott of Israel
/
UK