Skip to main content
In the News
This article is reposted from
Haneen Maikey in Newsweek
, click here to read the original article.

Why We Should Boycott Gay Pride in Tel Aviv 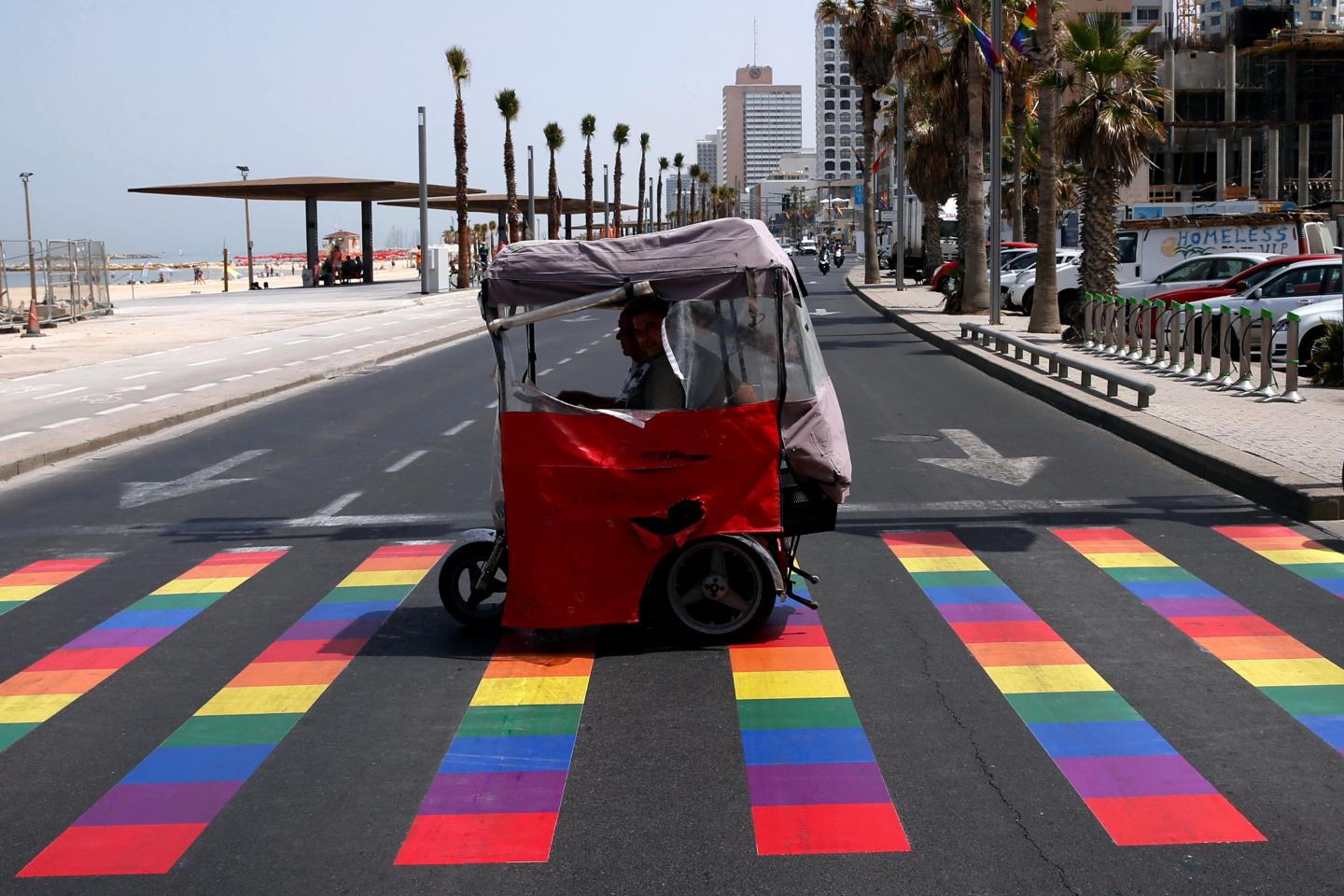 People ride over a rainbow-colored pedestrian crossing before the gay pride parade in Tel Aviv on June 3, 2016. (Baz Ratner/Reuters)

I am a queer Palestinian who has been working tirelessly over the last decade for sexual and gender diversity, as well as LGBTQI visibility in Palestinian society. And I am committed to fighting for justice for all people. So why am I calling for an international boycott of Gay Pride in Tel Aviv this June?

What am I talking about? Well, the Israeli government has heavily invested in a “Brand Israel” propaganda campaign that uses cultural events and festivities to depict Israel’s “ prettier face ” as a liberal, gay-friendly place. It does so to cover-up and maintain Israel’s ongoing system of violence and racial discrimination, enshrined in dozens of laws against indigenous Palestinians, queers and non-queers alike.

Israeli officials interested in “ nation branding ” spearheaded the Brand Israel campaign to try to change Israel’s image abroad from a militaristic and oppressive state facing mounting pressure for its human rights abuses to an attractive place for tourism and investment, worthy of political support by liberals around the world.

New York-based Israeli ambassador and former military commander Ido Aharoniled the campaign by bringing together various Israeli government ministries, including the Foreign Ministry and the Prime Minister’s office, to work with public relations and marketing specialists to improve Israel’s image.

According to his own official Israeli Consulate website, Aharoni is primarily concerned with “nation-branding methods”—seeking to create “a paradigm shift in the perception of Israel’s public image.”

Over the last 10 years, the number of international gay tourists in Israel has increased tenfold, from 6,000 in 2005 to over 60,000 in 2016. This is not the result of any exceptionally vibrant nightlife, but owing to this deliberate and admittedly effective government-sponsored propaganda campaign to make cynical use of gay culture to mask, or to “pinkwash,” its ongoing violence against the Palestinian people. This violence includes the daily reality of a brutal military occupation that turns 50 this month—right during Tel Aviv Gay Pride.

Israeli LGBTQI activists have themselves embraced the government's propaganda efforts by accepting government funding and letting their struggle for respect and equality be co-opted by the Brand Israel campaign. They are willingly serving as ambassadors in Israeli pinkwashing efforts around the world. Moreover, the LGBTQI movement’s woefully uncritical relationship with the Israeli government is clear from its efforts to reform the Israeli Army to be more open to the LGBTQI community, without acknowledging the daily violence that same army perpetrates against Palestinians. It’s also evident when LGBTQI Israelis attempt to win elections as gay representatives of right-wing political parties, rather than fighting to dismantle such parties and their government's brutal, discriminatory policies.

As Tel Aviv’s Pride parade unfolds this weekend, millions of Palestinians in the nearby occupied West Bank and Gaza mark 50 years of life under a suffocating Israeli military rule that denies them any political or civil rights and controls nearly every aspect of their days. Imagine a hostile foreign army controlling your life and your community’s life for half a century, stealing your land and building illegal settlements on top of it, destroying homes, businesses and farmland, and preventing you from traveling freely to study, work, receive medical care or visit your family and friends.

Imagine living encircled by military checkpoints and a wall four times as long as the Berlin Wall, and in some places twice as high. Imagine this foreign power repeatedly using brutal force, including bombings and raids, to enforce its repressive rule. Imagine all this, and you’ll get a glimpse of what Israeli military occupation has meant for millions of Palestinians.

Meanwhile, Palestinians living inside Israel continue to be subjected by dozens of racist laws that have legitimized their unequal status since the establishment of Israel in 1948. Since then, we have been facing an escalating policy of uprooting our Palestinian communities within present-day Israel, while Palestinian refugees are denied their U.N.-stipulated right to return to homes and lands they were expelled from during Israel’s establishment.

There can be no lasting or just peace until Palestinians living inside Israel, the occupied West Bank and Gaza are granted full equality in their homeland and Palestinian refugees are granted their legal right to return.

As a queer Palestinian activist, I am encouraged by the fact that for the second year running, Palestinian LGBTQI activists and their allies in the Boycott, Divestment and Sanctions (BDS) movement are calling for a boycott of Tel Aviv Pride and related events such as TLVFest, recognizing them as a manifestation of Israeli pinkwashing to obscure and normalize Israeli crimes and violations of human rights.

Our efforts are paying off. A “wave” of cancellations by international speakers has hit the Tel Aviv International LGBT Film Festival, for instance.

Award-winning South African filmmaker John Trengove, whose film is scheduled to be the festival’s opening-night event, canceled his participation, writing, “I have…come to believe that as long as current circumstances in Israel prevail, a rigorous boycott against ALL government funded initiatives is necessary. As a South African, I have first-hand experience of how boycotts helped bring about democratic transformation and therefore have decided to add my name and voice to the boycott Israel initiative.”

Trengove joins a growing number of artists, trade unionists, church activists, academics, students and others around the world who support the BDS movement’s aspirations to secure freedom, justice and equality for Palestinians.

My work in the Palestinian queer movement has taught me that LGBTQI solidarity must never come at the expense of other emancipatory struggles, including the queer Palestinian struggle against institutional racial discrimination, which meets the U.N. definition of apartheid, and Israeli military occupation. I know that there is no pink door through Israel’s illegal, racist wall that welcomes queer Palestinians while oppressing others.

My struggles intersect and cannot be separated. I reject the use of my queerness to erase other sites of oppression around me. Will you stand on the right side of history, with me?

Haneen Maikey is the co-founder and director of “ AlQaws for Sexual & Gender Diversity in Palestinian Society,” a Palestinian grassroots LGBTQI organization. Maikey is also part of the “ Pinkwatching Israel ” team, launched by queer Palestinian and Arab activists to expose what it calls Israel’s public relations efforts to cover-up its violations of human rights by portraying itself as a gay-friendly, progressive place.