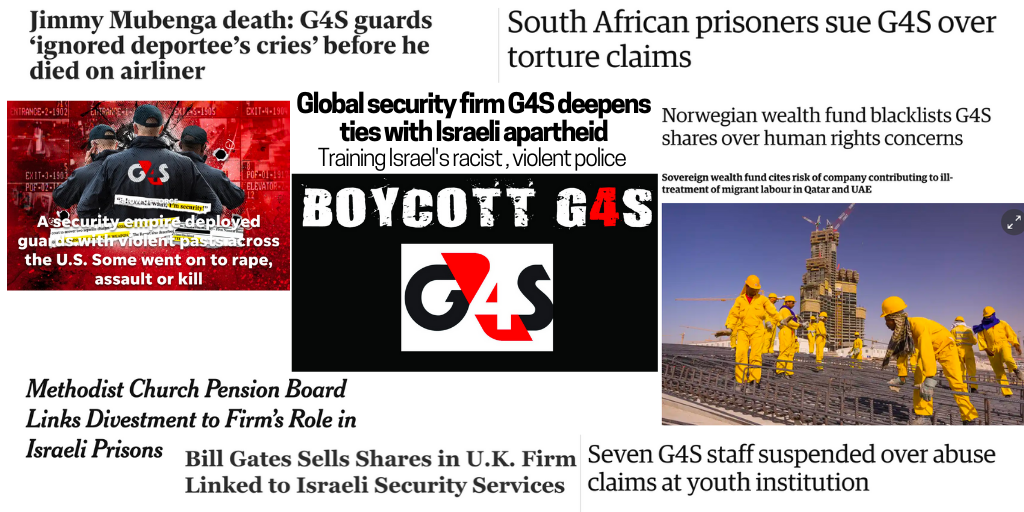 BDS Jordan — Jordan’s Boycott, Divestment and Sanctions group —  announced that the United Nations Development Program (UNDP) and a multinational company in Jordan -- that has asked to stay anonymous -- will not renew their contracts with G4S.

The British multinational G4S is the world’s largest security company, and has a long track record of involvement in human rights abuses worldwide.

G4S is implicated in the management of Israel’s Police Academy in Jerusalem, training Israel’s police force which has a long record of involvement in war crimes. It plays a central role in advancing Israel’s illegal annexation of occupied Palestinian East Jerusalem, including through the systematic demolition of Palestinian homes and expulsion of Palestinian residents from the city, the imprisonment of Palestinians without due process, torture and extra-judicial executions.

The BDS National Committee (BNC) welcomes the decisions by UNDP and the multinational company to meet their ethical and legal obligations by dumping G4S, which is complicit in Israel’s grave violations of Palestinian rights and international law through its partnership with Israel’s police.

The boycott campaign against G4S will continue until it ends its involvement in Israeli war crimes against our people. The impact of the BDS movement in the Arab world, especially in Jordan, is growing significantly, contributing to our struggle for freedom, justice and equality.

UNDP is the fifth UN body in Jordan to terminate -- or decide not to renew -- its contract with G4S, following UN Women, the World Food Program (WFP), UNICEF and UNHCR.

The global BDS campaign against G4S was launched in 2012, with a call from the Palestinian prisoners’ movement, due to G4S’s security contracts then with Israeli prisons where Palestinian political prisoners are tortured. G4S at the time also supplied equipment and services to Israeli occupation checkpoints and illegal settlements built on stolen Palestinian land.

Global BDS pressure, and the resultant reputational damage to the company, caused G4S to lose a large number of contracts and investors globally. As a result, it sold 80% of its business in the Israeli market in 2016.

G4S’ disregard for international law and its direct involvement in gross violations against Palestinians are in line with its longstanding complicity in serious human rights violations worldwide, particularly against indigenous peoples, immigrants, and people of color.

G4S’ management of private prisons in a number of countries has frequently been criticized. A newly released government report into conditions at the Mangaung Correctional Centre in South Africa says that inmates were assaulted by staff, forcibly injected with medication, and locked in a cell without a toilet, lighting, windows, or ventilation, when the prison was controlled by G4S and a South African company in 2013.

The UK government stripped G4S of its contract to manage one private prison in 2019 after  finding the jail to be violent and drug-ridden. A recent study found that private prisons in the UK, a number of which are run by G4S, are more violent than public jails.

A 2019 investigative report by USA Today showed that G4S’ US employees have a track record of acts of violence, including rape, murder and aggravated assault.