Skip to main content
In the News
This article is reposted from
Tunisian Campaign for the Academic and Cultural Boycott of Israel (TACBI)
, click here to read the original article.

January 12, 2018
/ By
Tunisian Campaign for the Academic and Cultural Boycott of Israel (TACBI)
/
Tunisia

Close to one hundred Tunisians, including prominent academics, well-known artists and important political and labor union leaders, launch the Tunisian Campaign for the Academic and Cultural Boycott of Israel. 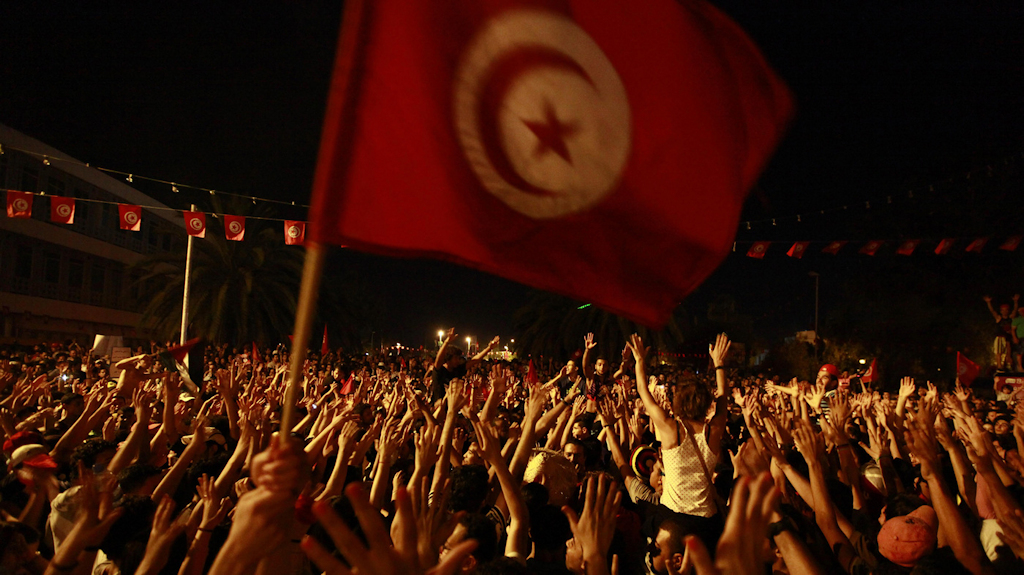 People gather outside the Constituent Assembly headquarters during a protest in Tunis, Tunisia (2013) Anis Mili/Reuters/Landov

Almost one hundred Tunisian academics, artists, intellectuals and journalists have called for the academic and cultural boycott of Israel. This call is published on the 7th anniversary of the revolution of freedom and dignity which paved the way for the advent of a democratic system in Tunisia.

The appeal states in its preamble that “the recent recognition by US President Trump of Jerusalem as the capital of Israel, with the proven complicity and support of some Arab regimes, offers Arab citizens a cruel but salutary reminder of the progress of the rampant normalization of relations of the Arab world with the Zionist colonial state."

Responding to the call of the Palestinian civil society for Boycott, Divestments and Sanctions against Israel (BDS), the signatories declare their commitment to the Palestinian Campaign for the Academic and Cultural Boycott of Israel (PACBI) and in particular to the international BDS movement.

The signatories pledge to fight all forms of normalization of relations of the Arab world with the Zionist colonial state. They invite their colleagues from the Tunisian community in Tunisia and abroad:

Inspired by the South African anti-apartheid movement, the international BDS campaign, led by Palestinian civil society, aims to intensify economic and political pressure on Israel until it recognizes the inalienable rights of the Palestinian people and complies entirely with the precepts of international law.

Professor Hafidha Chekir, Professor of Public Law and Vice President of the International Federation of Human Rights (FIDH), “hopes that this call will help to create even more solidarity with the BDS movement around the world, to support the Palestinian people struggle to regain its rights to dignity, freedom and self-reliance, and above all to convince Arab leaders to accompany and support the legitimate demands of this people."

Professor Larbi Chouikha of the Institute of Press and Information Sciences of Manouba believes that “any person loving justice, freedom, the respect for the right of peoples to self-determination, regardless of their confessional affiliations, identity, nationality and political commitments, must defend the Palestinian cause, which is a just and legitimate cause, and denounce the Zionist colonial state and its apartheid regime’s actions against the Palestinian people; it is the very meaning of the values ​​that underlie the Tunisian Revolution. »

Professor Nihel Ben Amar of the National Institute of Applied Sciences and Technology of the University of Carthage said that “Israel is violating with impunity the right to education and academic freedom. Its dangerous and incessant attacks on academic freedom spare neither international students and academics who travel to Palestine to study and work in Palestinian academic institutions, nor even Israeli academics who dare to criticize Israeli colonial policy and apartheid. Those wishing to defend academic freedom for all should support the boycott of Israeli academic institutions as long as Israel does not recognize the rights of the Palestinian people as enshrined in international law.”

The academic and political and labor union activist Jounaïdi Abdeljaoued considers that "the academic and cultural boycott of Zionist institutions and the rejection of the normalization with Israel should not mean any break in relations with the Palestinians living under the yoke of colonialism in the occupied territories. On the contrary, it is our mode of action as academics, intellectuals, artists and labor unionists to lift the embargo imposed on our brothers and sisters in Palestine and to force the apartheid Zionist regime to respect international legality and to abide by the UN resolutions that address the rights of the Palestinian people, and in the first place their right of return to their despoiled land.”

Professor Baccar Gherib, former Dean of the Faculty of Juridical, Economic and Management Sciences of Jendouba, “signs [the call] because, by this position, civil societies, academics, intellectuals and artists from all over the world, who love universal humanistic values and are committed to the rights of peoples and their dignity, recall that Israel’s policy in the occupied Palestinian territories is a racist and colonialist policy and that all the violations of the basic rights of Palestinians that have lasted too long must to cease.”

The mathematician Ahmed Abbes, of the National Center for Scientific Research (CNRS) in Paris, said that "the BDS movement is in essence centered on civil societies around the world. It draws its strength from the value placed on respect for human rights and international law, as well as a will to fight all forms of racism. It has found considerable resonance in Europe and the USA, but remains so far relatively undeveloped in the Arab world. This call from Tunisian civil society is a new milestone for the BDS movement that we hope will be followed by others throughout the Arab world.”

The call can be viewed and signed by Tunisian academics, artists, intellectuals and journalists at the following address: tacbi.org