June 9, 2017
/ By
Palestinian Campaign for the Academic and Cultural Boycott of Israel (PACBI)
/ 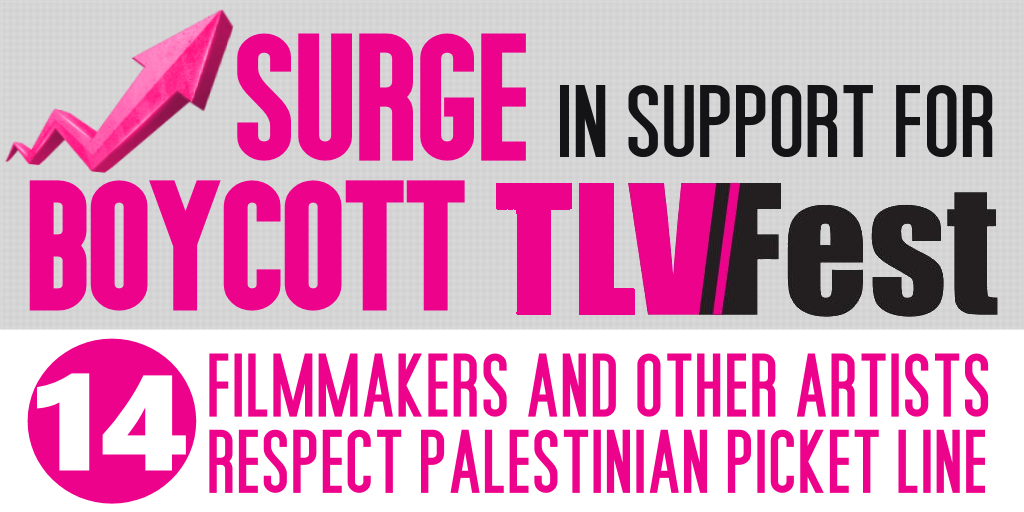 June 9, 2017 — After a wave of cancellations almost derailed this year’s Tel Aviv International LGBT Film Festival (TLVFest) in what festival organizers called “a severe upheaval,” more filmmakers and artists from around the world joined the boycott of the festival called for by Palestinian LGBTQI groups and their allies in the grassroots, Palestinian-led Boycott, Divestment and Sanctions (BDS) movement.

In total, fourteen filmmakers and other artists canceled their participation or declared their support for boycotting the festival because it is sponsored by the Israeli government, and is therefore clearly subject to the Palestinian call for cultural boycott until Israel ceases its systematic violations of Palestinian human rights. Filmmakers also expressed their opposition to the festival’s “pinkwashing,” or cynical use of LGBTQI rights to cover up and normalize Israel’s regime of oppression against Palestinians.

Brazilian filmmaker Sávio Leite is the latest artist to express support for the Palestinian call by pulling his film, Venus – Filly the Lesbian Little Fairy, from the festival. In a private letter sent to festival organizers, seen by the Palestinian Campaign for the Academic and Cultural Boycott of Israel (PACBI), Leite stressed the importance of listening to the oppressed as vital for genuine and effective solidarity. Leite also expressed regret that Israeli military technology underpinning its apartheid regime is being used to suppress social movements in Brazil and to violate the human rights of Black and poor populations in particular.

As a supporter of the Palestinian call for the cultural boycott of Israel, called for by Palestinian artists, cultural organizations and civil society at large since 2004, I believe that we should respect the picket line set up by the Palestinians as a nonviolent form of solidarity with their struggle for freedom, justice and equality.

… I will be ensuring that my work isn’t screened at such [Israeli government sponsored] festivals in the future, and I would urge artists of conscience to do the same.

Antonio da Silva, a renowned Portuguese director, canceled his public conversation with film festival attendees in what was scheduled to be one of the festival’s headline events.

Six members of the cast and crew of the German film The Misandrists stated that they “openly stand with Palestinian queers and their call for the cultural boycott of the Tel Aviv LGBT Film Festival,” despite the decision by the film’s director and producer to violate the picket line. They said, “Unfortunately we cannot stop the film from being shown, but it is showing against our will.”

Haneen Maikey from Pinkwatching Israel reflected on this latest round of solidarity with Palestinians, saying:

As a queer Palestinian committed to justice for all people, I’m heartened to see the number of artists who dropped out of Tel Aviv’s LGBT Film Festival and rejected the cynical use of gay culture to mask, or ‘pinkwash,’ Israel’s ongoing violence against the Palestinian people. To add insult to injury, this festival, alongside Tel Aviv Gay Pride, is being celebrated in the same week that Israel’s brutal military occupation turns 50.  I’m glad so many filmmakers have realized that there is no pink door through Israel’s illegal, racist wall that welcomes queer Palestinians while oppressing others, and stood with us, on the right side of history.

In an earlier wave of support for the Palestinian picket line, award-winning South African filmmaker John Trengove canceled his participation in the opening night of the festival, expressing concern that his presence “could serve as a diversion from the human rights violations being committed by the state of Israel.”

U.S. directors Catherine Gund and Daresha Kyi, along with the entire team at Aubin Pictures who produced a documentary on the radical Mexican singer Chavela Vargas, stated:

Our film, which sets forth a vision of peace and freedom, should not be at an Israeli-government funded cultural event. We stand in solidarity with the boycott.

Nadia Abraham, founder of the Faroe Islands' International Minority Film Festival, withdrew from the festival’s jury and from a panel on women in cinema. She was followed by Canadian actress and comedian Fawzia Mirza, who also withdrew her participation in order to respect the Palestinian boycott picket line.

The Tel Aviv International LGBT Film Festival organizers have acknowledged that they receive funding from Israel’s Ministry of Culture and have no intention of refusing it. This government ministry is the hub of Israel’s propaganda campaign to obscure Israeli crimes and promote a positive image of the country abroad.

It later emerged that the festival enlisted the pro-Israel lobby group Creative Community for Peace (CCFP) to attempt to persuade filmmakers against cancellation. While presenting itself as an organization interested in “building bridges between people through art and music,” CCFP is a front group for Stand With Us, a right-wing pro-settlement lobby organization funded by the Israeli Prime Minister’s Office that works closely with the Ministry of Foreign Affairs. Stand With Us has also allied itself with virulently anti-LGBTQI organizations such as Christians United for Israel to further its pro-Israel agenda, rendering TLVFest’s work with CCFP particularly reproachable and an affront to its own purported commitments.

The Palestinian Campaign for the Academic and Cultural Boycott of Israel (PACBI) was initiated in 2004 to contribute to the struggle for Palestinian freedom, justice and equality. PACBI advocates for the boycott of Israeli academic and cultural institutions, given their deep and persistent complicity in Israel’s denial of Palestinian rights as stipulated in international law. Visit PACBI’s website and follow us on Twitter @PACBI