HPE maintains Israel’s racist population registry, a pillar of apartheid against Palestinians. It must be added to the UN database of businesses complicit in Israel’s illegal settlement enterprise. 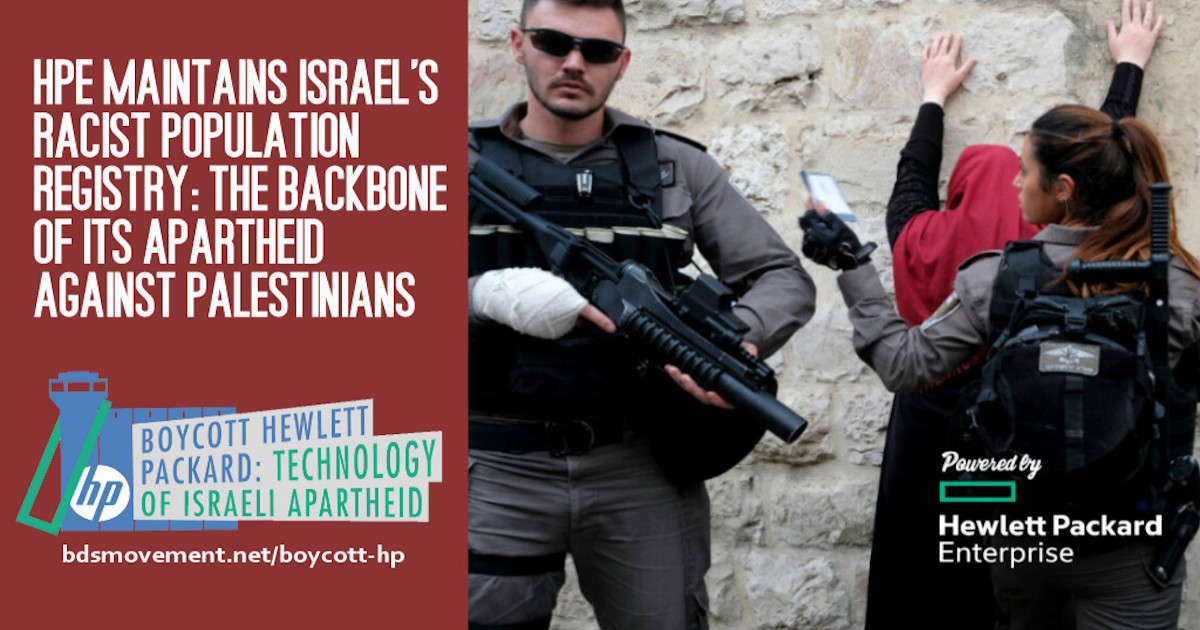 HP Inc and HP Enterprises (successors of Hewlett-Packard Company) help Israel enforce an apartheid regime over the Palestinian people. Palestinian civil society has called for boycott and divestment from HP until it ends its complicity.

Israel’s planned formal annexation of parts of the occupied West Bank and its ongoing de facto annexation are both in violation of international law. As we continue to work to stop Israel’s annexation, it is important to remember that Israel’s regime of settler colonialism, occupation and apartheid against the Palestinian people is decades-old. Governments as well as corporations have enabled and supported this oppression and have helped fuel Israel’s impunity.

HP Inc has been the exclusive provider of computers to the Israeli army for more than a decade.

HPE provides servers for the Aviv System, the computerized system of Israel’s Population and Immigration Authority, which includes the Yesha database containing information on Israeli citizens living in Israel’s illegal settlements in the occupied Palestinian West Bank. The Population and Immigration Authority implements Israel’s three-tiered system of laws and policies on citizenship, residency, family reunification, naturalization and ID cards, which privileges the Jewish population, including those in the illegal settlements, while systematically discriminating against the Indigenous Palestinians in Israel, as well as in Israeli-annexed occupied East Jerusalem.

Israel’s apartheid extends to both sides of the Green Line, as well as to Palestinians in exile. With its support to this institutionalized system of racial discrimination, HPE  enables and profits from Israel’s apartheid policies, including the formal annexation of East Jerusalem, as well as the ongoing de facto (and possible de jure) annexation of the occupied West Bank settlements.

HPE also maintains and profits from the IT infrastructure of Israel’s prison system, which holds 4,700 Palestinian political prisoners, including many children.

One of Israel's most recent political detainees was Mahmoud Nawajaa, a human rights defender and BDS coordinator who was arrested by Israeli occupation forces on July 30, 2020. Declared a prisoner of conscience by Amnesty International, he was detained by the Israeli military without charge for 19 days, subjected to ill-treatment, and denied access to a lawyer for 15 days, before he was finally released due to international pressure.

HP companies’ profit from all aspects of Israel’s apartheid. Their role is similar to Polaroid’s complicity with South Africa during apartheid. Polaroid produced photographs for the infamous passbooks that black South Africans had to carry, which denied their freedom of movement. HP is the “Polaroid of our time”.

The most effective way to counter Israeli apartheid and settler colonialism is through targeted Boycott, Divestment and Sanctions (BDS) campaigns. HP Inc and HPE are complicit in Israel’s crimes against the Palestinian people and must be held accountable, just as Polaroid was pressured to end its business with apartheid South Africa through a divestment campaign which was in fact initiated by workers of the company in the US.

The global Boycott HP campaign is working to hold HP companies accountable through mass boycotts and divestments until they end their role in Israeli crimes against Palestinians. Churches have divested from HP. Trade unions, solidarity groups and student organizations have joined the campaign and are popularizing it in their respective regions. The Dublin City Council voted in 2018 to end all its contracts with HP branded corporations. The campaign has organized successful global actions over the years to highlight the necessity of holding HP companies accountable.

The UN database of companies enabling Israel’s illegal settlements, released in February 2020, is an important step towards effective accountability measures against corporate complicity in Israel’s settlement enterprise that constitutes a war crime. We call on the UN Human Rights Office for the High Commissioner to include HPE in the update to the UN database.

We reiterate our call for mass boycotts of HPE and HP Inc. until they end their complicity in Israeli apartheid and war crimes. This is the only moral stand to take in the face of Israel’s ever intensifying violations of Palestinian human rights, and the present attempt to turn its de facto annexation of occupied Palestinian territories into de jure annexation. 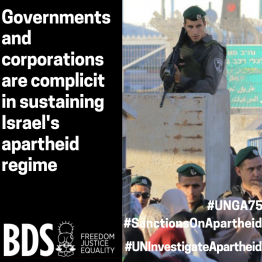 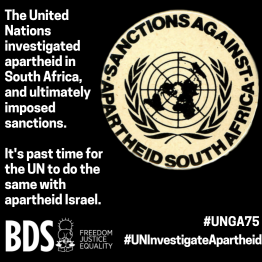 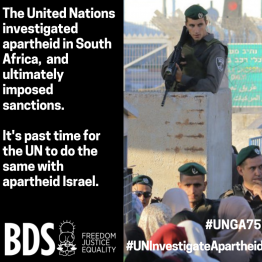