Skip to main content
In the News
This article is reposted from
The Red Nation
, click here to read the original article.

September 7, 2019
/ By
The Red Nation
/
United States
The Red Nation urges all Native people and Nations to respect the Palestinian call for BDS by pledging NOT to collaborate with universities, institutions, or organizations that promote and normalize the occupation. 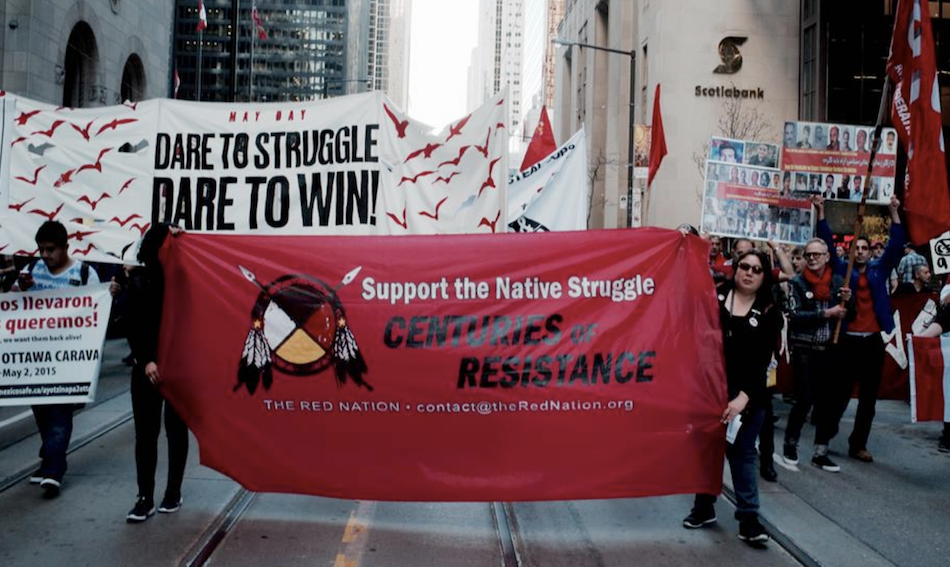 The Liberation of Palestine Represents an Alternative Path for Native Nations

Palestine is the moral barometer of Indigenous North America. While there is widespread agreement among Native people that European colonialism and Indigenous genocide is criminal and immoral, there are a surprisingly high number of Native politicians, elites, and public figures who don’t extend the same sympathies to Palestinians, Arabs, and Muslims. They range from outright Zionists who support Palestinian ethnic cleansing to liberal centrists who don’t support Palestinian rights of protest and resistance.

Indigenous leaders frequently and falsely equate aspirations of Indigenous peoples with the Zionist settler project, which requires the displacement, removal, and continued banishment of Native Palestinians from their homelands.

First Nations Indigenous leaders, such as Wab Kinew, Phil Fontaine, and Ron Evans (all powerful men), have taken pro-Zionist and anti-Palestinian positions by aligning with Israeli settler colonialism. In the United States, Ben Shelly, Myron Lizer, Tom Cole, and Deb Haaland have made anti-Palestinian statements as part of their political platforms.

Last year during her run for US Congress, Haaland equated Native Americans getting the right to vote in New Mexico in 1948 to the creation of the state of Israel as “parallel” experiences. And when US representative Ilhan Omar, a black muslim woman and refugee, spoke out against AIPAC (the American Israel Public Affairs Committee), a pro-Zionist, anti-Muslim, and anti-Arab lobby group, Haaland criticized Omar’s remarks as a “type of anti-semitism” emphasizing that as Democrats, “we support Israel.” To advance her own standing with Zionist liberals like Nancy Pelosi, Haaland aligned herself with the rightwing of the Democratic party that has frequently maligned and smeared progressive Muslim women like Rashida Tlaib and Ilhan Omar. Haaland’s opportunism demonstrates that she is anything but an ally to Palestine and more of an opportunist willing to throw Palestinians under the bus when it benefits her political career.

Pro-Zionism isn’t confined to the world of politicians. Indigenous artists, athletes, and academics have also chosen to ignore Palestinian rights to advance their careers.

In 2012, poet Joy Harjo ignored Palestinian calls for Boycott, Divestment, and Sanctions (BDS) of Israeli institutions when she toured Israel. This year, the Library of Congress made her the US poet laureate. In 2017, international jurist and former UN Special Rapporteur on the Rights of Indigenous Peoples, S. James Anaya crossed the BDS picket-line to give a lecture on Indigenous rights at the Hebrew University of Jerusalem. Last year, while unarmed Gazans were gunned downed by Israeli snipers during the Great March of Return, the Iroquois Nationals lacrosse team refused Palestinian calls to boycott an international lacrosse tournament in Israel because they claimed Israel recognized “Iroquois sovereignty.”

The refusal of the United States and Canada to recognize Indigenous sovereignty is not an excuse to trample the rights of Palestinians. And no artistic expression, sports tournament, or academic talk trumps the right of Palestinians to live in peace in their own homeland.

These examples show that Indigenous artists, athletes, celebrities, and politicians are rewarded for pro-Zionism and anti-BDS positions. In other words, it’s lucrative for Indigenous peoples in settler societies to be anti-Palestinian, anti-Arab, or anti-Muslim — because that’s the status quo for US imperialist interests. After all, to be anti-Palestinian is to be pro-United States, pro-Israel, and, therefore, pro-settler colonialism.

And like its patron, the United States, white historians in the United States have long framed the history of settler colonialism in this nation as a “conflict” between two equal sides: cowboys and Indians; settlers and savages. Dakota scholar Elizabeth Cook-Lynn reminds us there are no two sides to a story of colonial dispossession and genocide. In a settler nation, there is a clear perpetrator: the settler state. Like Palestinians, Native people continue to resist systematic colonialism by the U.S. We refuse to be uprooted. Refusal is the basis of all forms of anti-colonial resistance, and we, as the original peoples and nations of these lands, extend unwavering solidarity and support to our Palestinian relatives who struggle for liberation from the same violence that threatens to erase our histories and our futures.

There is a prominent tendency within US-based Palestine solidarity work to foster peace and reconciliation as a model of justice. We strongly object to this tendency. Israeli colonization perpetuates violence, regardless of the liberal niceties about “peace” and “respect” you place on it. Peacemaking is not a bilateral responsibility in a settler colonial state that perpetuates war crimes against the colonized. The notion of “mutual” peace implies that the colonized holds equal responsibility for justice. In a colonial context, colonialism is the original crime, and colonizers the aggressors. When did invasion become self-defense? The only form of justice that matches this crime is decolonization. The decolonization of Israel requires withdrawing the Zionist occupation from occupied Palestine, removing the blockade from Gaza, and honoring the Palestinian right of return (all tenets of BDS, which we detail below). And those who advocate for justice in Palestine are also obligated to advocate for our liberation and decolonization from US occupation.

Israel is the largest recipient of U.S. foreign aid in the world. They offer their citizens complete healthcare coverage paid for by U.S. dollars, while Palestinians die on a daily basis because they are unable to access healthcare in the occupied territories, much less pay for it. Israel commits atrocities against Palestinians with impunity because the U.S. allows it to happen. We are citizens of Native nations that endure despite violent colonial occupation by the United States. We have not achieved decolonization and the national liberation of our homelands because the U.S. has sought to thwart our freedom dreams at every turn. It is thus no surprise that it bankrolls Israel’s efforts to do the same to Palestinians. U.S. occupation gains strength and legitimacy through Israeli occupation, and vice versa.

The best method of resisting–and ultimately undoing–the collusion between the US and Israel is to enforce Boycott, Divestment, and Sanctions (BDS). BDS is a Palestinian-led movement for freedom, justice and equality founded in 2005 that upholds the simple principle that Palestinians are entitled to the same rights as the rest of humanity. The BDS movement is a form of non-violent advocacy to demand the state of Israel 1) end its occupation of all Arab-Palestinian lands, 2) recognize the equal rights of Arab-Palestinians, and 3) respect the rights of Palestinian refugees to return to their homes as stipulated in UN Resolution 194.

BDS is inspired by the South African anti-apartheid movement that helped to put international pressure to end apartheid. The US and Israel backed the racist South African apartheid regime when the rest of the world morally opposed it. Indigenous peoples were made a category in the UN Decade to Combat Racism, Racial Discrimination, and Apartheid, which began in 1974. Zionism as a form of racism was also part of the initial agenda (which was later removed after the 1993 Oslo accords) and gave a platform for Palestinian rights. US presidents from Jimmy Carter to George W. Bush boycotted the UN programs on racism, most likely over the questions of apartheid in South Africa and Palestine. This boycott included the two UN decades to combat racism and apartheid from 1974-1993.

Nevertheless, the connections between the South African anti-apartheid movement, Palestinian rights, and Indigenous rights cannot be ignored or dismissed. Without this lateral solidarity, Indigenous peoples would not have made such historic gains, like the drafting of the 2007 UN Declaration on the Rights of Indigenous Peoples (UNDRIP). It should come as no surprise that Australia, Canada, New Zealand, and the United States (all settler colonial regimes) initially voted against UNDRIP, maintaining their decades-long position of hostility towards Indigenous people at the UN. Israel was absent from this vote.

Another key part of the BDS movement is the economic boycott of, and divestment from, U.S., international, and Israeli companies that profit from Israel’s occupation. Israel argues that boycotting Israeli companies hurts Palestinians whom they employ; however, Israel controls natural resources, has intentionally destroyed Palestinian businesses, and has restricted Palestinians’ ability to steward their own lands and support their people. Palestinians living in the Gaza Strip–nearly 2 million people–are completely restricted from visiting family in the West Bank or in other countries or seeking crucial medical care. Israel profits from its blockade of the Gaza Strip by allowing its own exports into Gaza for sale on the market and simultaneously destroys Palestinian agricultural land and severely restricts Gaza’s exports.

The BDS movement also calls for a cultural boycott in addition to academic and economic boycotts. Israel deliberately uses culture, entertainment and the arts to normalize and whitewash their occupation of Palestinian lands. BDS calls upon artists and entertainment performers to refrain from going to Israel.

With this history of solidarity in mind, we urge all Native people and Nations to respect the Palestinian call for BDS by pledging NOT to collaborate with universities, institutions, or organizations that promote and normalize the occupation. Don’t allow yourselves to be redwashed by Israel and its apologists to justify ethnic cleansing. Don’t cross the picket line!

According to Jewish Voice for Peace, it is anti-semitic to claim that all Jewish people are aligned with the aims and goals Zionism and to equate support for Israel with the idea that Israel is a Jewish-only homeland. While anti-semitism is a real issue and on the rise as a central tenet of rightwing authoritarianism and fascism, BDS and justice for Palestine are not anti-semitic. To say otherwise is to minimize and obfuscate the crimes of Israel and the suffering of Palestinians. We condemn pervasive anti-Indigenous, anti-Arab, and anti-Muslim sentiments, beliefs, and practices in the US and Israel with a rigor and veracity that equals our condemnation of anti-Jewishness worldwide.

We, The Red Nation, pledge to fulfill our commitment to Palestinian liberation by doing the following:

In solidarity with all colonized peoples of the world,