Skip to main content
In the News
This article is reposted from
BDS Colombia
, click here to read the original article.

March 8, 2019
/ By
BDS Colombia
/
Colombia
The Colombian bookstore chain Panamericana canceled its contract with the private security company G4S, following a campaign in which customers asked Panamericana to drop G4S due to complicity with Israeli crimes in Palestine. 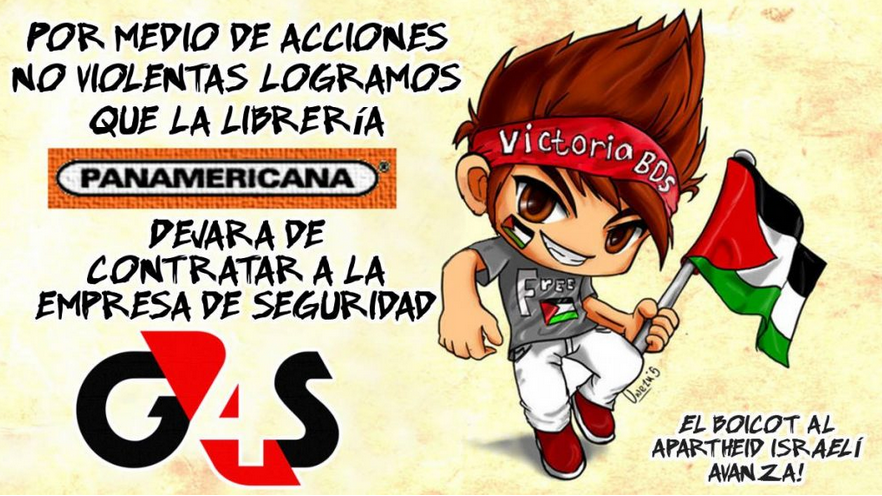 The Colombian bookstore chain Panamericana has canceled its contract with the private security company G4S, following a campaign in which the bookstore’s customers asked Panamericana to drop the contract due to G4S’s complicity with Israeli crimes in Palestine. This victory reveals that the G4S brand has become synonymous with violations of Palestinian human rights, making G4S a public relations liability for its corporate clients.

Through an online petition and during a series of demonstrations and street theater performances in front of Panamericana bookstores, more than 900 people signed petitions asking Panamericana to cancel its contract with G4S. These petitions were delivered to Panamericana management in late 2018 by the Colombian collective for Boycott, Divestment, and Sanctions (BDS) against Israel. In addition, during the protests, many other Panamericana customers entered stores to hand their letters directly to company managers.

Panamericana is the largest bookstore chain in Colombia, with 35 stores in the country and 1,700 direct employees. Although the bookstore refused to officially respond to its customers’ petitions, G4S stickers at its stores were replaced by those of another security company, demonstrating that Panamericana opted to cancel or to not renew its contract with G4S due to the boycott campaign.

The Colombian campaign to boycott the British security company G4S was launched following a call by Palestinian civil society as part of the global campaign of Boycott, Divestment, and Sanctions against Israel (BDS), which seeks to defend Palestinian rights by boycotting Israel and companies complicit in Israeli apartheid. For many years, G4S ran Israeli jails where Palestinian political prisoners were held without trial and tortured. It also provided services and products to illegal Israeli settlements, military checkpoints in the occupied Palestinian territories, and Israeli police facilities.

The campaign against G4S has achieved a series of major victories around the world. The Bill Gates Foundation and the United Methodist Church of the United States sold all of their shares in G4S as a result of BDS campaigns, and the company has lost multi-million-dollar contracts with unions, universities, government bodies, and private companies. Institutions that have canceled contracts with G4S as a result of BDS campaigns include the University of Helsinki, the Municipality of Durham County in the United States, the headquarters of UNHCR and UNICEF in Jordan, and the Colombian restaurant chain Crepes and Waffles.

Due to the economic losses caused by the international boycott movement, G4S announced in 2016 that it intends to sell its Israeli subsidiary and leave the country. However, G4S ended work in Israeli prisons, but has deepened its complicity by training Israeli police. G4S has broken promises to end its involvement with Israeli repression before. That’s why the global G4S boycott campaign will continue until the security company puts a complete end to its participation in Israeli occupation and apartheid.