May 24, 2019
/ By
Palestinian BDS National Committee (BNC)
/
Germany, Palestine
Through statements issued by both the PLO and Palestinian civil society groups, and protests at German Representative Offices, Palestinians have unanimously condemned the German Parliament’s anti-Palestinian resolution attacking the right to boycott. 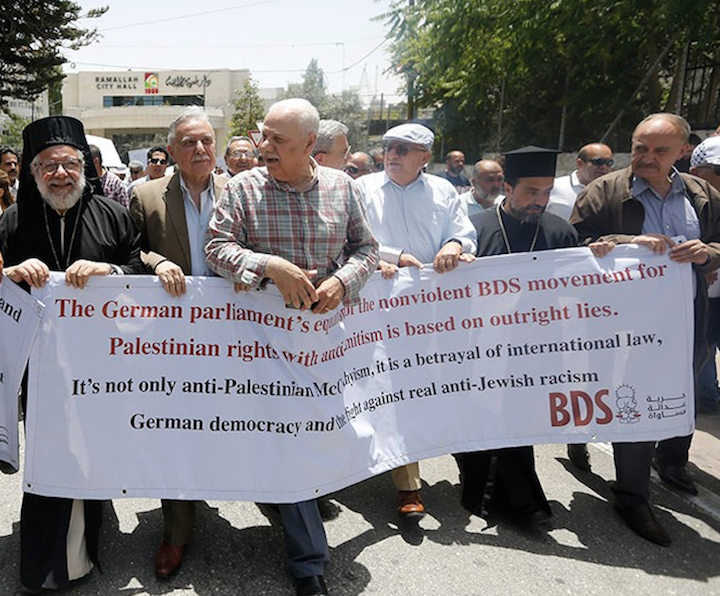 May 24, 2019 - Through statements issued by both the Palestine Liberation Organization, the sole legitimate representative of the Palestinian people, and Palestinian civil society groups, and protests at German Representative Offices in Ramallah and Gaza, Palestinians have unanimously condemned the German Parliament’s May 17 resolution that falsely labeled the Palestinian-led BDS Movement as anti-Semitic.

In a May 19 statement, The Executive Committee of the Palestine Liberation Organization called the German Parliament’s resolution “an attack against the Palestinian people and their  legitimate and inalienable rights.” The PLO Executive Committee said that the BDS movement rejects “racism and discrimination,” and called “on the German Parliament to withdraw this decision,” and on “German parties to reject the decision.” They further warned that “the PLO’s Executive Committee will reconsider its relations with German unions, parties and institutions if Germany continues its complicity with the occupation and standing against our people’s rights.”

In a tweeted statement on May 17, the day of the Parliament’s resolution, the BDS Movement described the resolution as “based on outright lies. It’s not only anti-Palestinian McCarthyism, it is a betrayal of international law, German democracy and the fight against real anti-Jewish racism.”

At a protest with 200 participants on Wednesday, May 22 at the German Representative Office in Israeli-occupied Ramallah, Palestinian civil society groups delivered a letter signed by representatives of over 200 Palestinian civil society organizations. The civil society letter said that the groups “condemn in the strongest terms” the Parliament’s resolution, “reject the baseless allegations and fabrications of  the Bundestag,” and call for the German Parliament to “repeal this anti-Palestinian, anti-Arab resolution.” A Thursday protest at Germany’s Representative Office in the Gaza Strip, where two million Palestinians live in an open-air prison under Israel’s siege, echoed those same messages.

The civil society letter said that, “Denying Palestinians the right to non-violently advocate for freedom, justice and equality is anti-Palestinian and puts the Bundestag at odds with international law, with universal democratic principles and even with the formal position of the European Union.”

Palestinian civil society groups reaffirmed the principles that the Palestinian BDS National Committee had laid out in  2017 statement  entitled “Racism and racial discrimination are the antithesis of freedom, justice and equality”,  saying that “the BDS movement rejects all forms of racism and discrimination, including Islamophobia, anti-semitism, sexism, anti-Black racism and homophobia, and is inspired by the South African anti-apartheid movement and the US civil rights movement. BDS targets complicity, not identity.” They called on “Germany to end all forms of complicity in Israel’s illegal occupation and apartheid by banning Israel’s illegal settlement products and services, ending all military trade and military research with Israel and supporting the suspension of the EU-Israel Association Agreement.”

In another statement, the Palestinian Christian group Kairos Palestine said that, “Christians in Palestine are saddened and confused” by the German Parliament’s resolution. Kairos explained, “the State of Israel, institutions and companies that are complicit in the denial of Palestinians’ human rights are the targets of the BDS movement. Everyone has the right to criticize the unjust actions of a state and a corporation. The Palestinian BDS movement does not boycott or campaign against any individual or group simply because they are Israeli.”