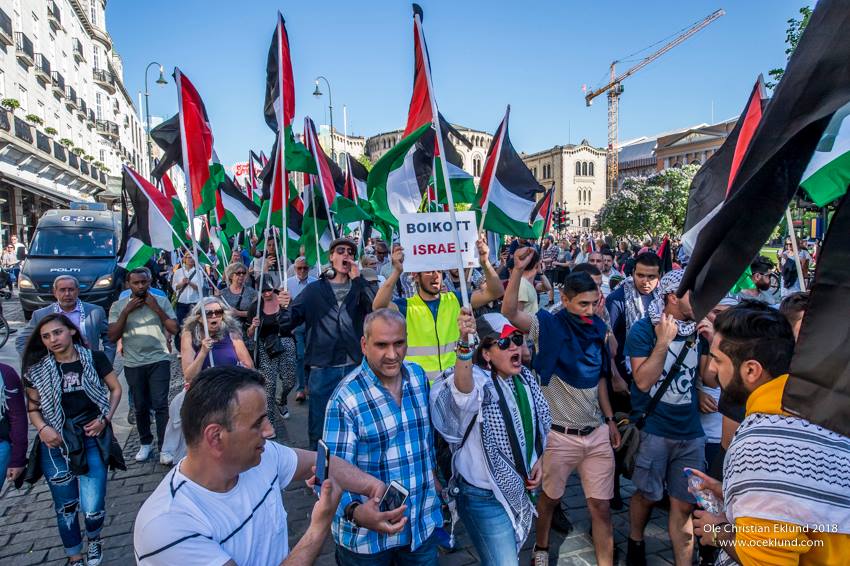 October 28, 2019 - In a historic step, Oslo’s newly installed City Council is banning Israeli settlement goods and services from public procurements. The ban on goods from Israel’s illegal settlements in the Occupied Palestinian Territory is a part of the newly adopted platform for 2019 - 2023 approved by Oslo’s recently-elected City Council, led by the Socialist Left (SV), Labour and Green parties.

Despite concerted efforts by Israel and its right-wing allies in Norway and worldwide to repress accountability measures in support of Palestinian rights, Oslo, Norway’s capital and largest city, has now become the sixth Norwegian municipality to ban settlement goods and services, along with one county council.

Last week, the U.N. independent expert on human rights in the Palestinian territories, Michael Lynk, called for an international ban on all Israeli settlements products, as a step towards ending Israel’s 52-year-old illegal occupation.

Oslo’s City Council committed through their new platform to:

Investigate the scope of action in the procurement regulations to not trade goods and services produced on territory occupied in violation of international law by companies operating under the permission of the occupying power.

The ban on settlement products and services does not distinguish between Israeli and international corporations that operate in Israel’s illegal settlements.

The Palestinian people, who have to deal with the illegal occupation of their territory every single day, deserve international attention and support. It is a shared global responsibility to help ensure that human rights and international law are not violated. I am proud that the Oslo City Council is now taking steps to prevent goods and services purchased by the city from supporting an illegal occupation of Palestine or other territories.

The Socialist Left Party of Norway has been a longtime supporter of the BDS movement.

Tora Systad Tyssen of the Association of Norwegian NGOs for Palestine (Fellesutvalget for Palestina) said:

The Oslo City Council follows those in Trondheim, Tromsø, Vaksdal, Hamar, Lillehammer, and the Nordland County Council in banning  business with the illegal Israeli settlements in occupied Palestinian land. It is uplifting and inspiring to see Norwegian municipal councils taking a firm stand for human rights and international law when our current government is failing to.

Whereas our national government wants more trade and cooperation with Israel, the new City Council in Oslo states clearly that it does not want to contribute financially to the large-scale theft of Palestinian land and resources that Israel’s expanding settlement industry is carrying out.

We welcome this legally and morally responsible step taken by the Oslo City Council. Local councils are showing they are undeterred by repression, and continue to pave the way, despite inaction by national governments. A ban on goods and services from Israel’s illegal settlements is the very least that government institutions should enact to cut their complicity with Israel’s regime of apartheid, settler colonialism and occupation.

On top of such a ban, the Norwegian government should also adopt a comprehensive  embargo on direct and indirect arms trade and military cooperation with Israel and Israeli companies to ensure end-user compliance with international law.

The Irish government is currently reviewing the Occupied Territories Bill, approved by both houses of Parliament, which would ban Ireland from importing goods from Israel’s illegal settlements.

In 2018, three right-wing parties sought to prevent the settlement boycotts in Trondheim and Tromsø. However, Norway’s state secretary at the foreign ministry, Audun Halvorsen, dealt a blow to those efforts, saying that a boycott of “goods and services produced in settlements does not contradict Norway’s international commitments.”