No to Eurovision Pinkwashing. More Than 100 LGBTQ+ Groups Call for Boycott of Song Contest in Israel.

January 29, 2019
/ By
Palestinian Campaign for the Academic and Cultural Boycott of Israel (PACBI)
/

Queer and trans liberation organizations from nearly 20 countries across Europe and beyond are calling on global LGBTQIA communities to take a stand for Palestinian human rights and boycott the 2019 Eurovision Song Contest in Israel. 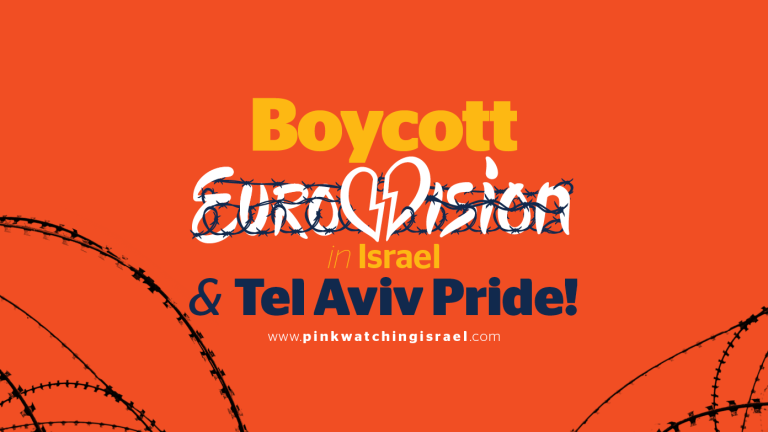 January 29, 2019—More than 100 queer and trans liberation organizations from nearly 20 countries across Europe and beyond are calling on global LGBTQIA communities to boycott the 2019 Eurovision Song Contest in Israel.

The signatories condemn Israel’s “shameful” use of Eurovision, which has a strong following among LGBTQIA communities, to “distract attention from its war crimes against Palestinians” and “forward its pinkwashing agenda, the cynical use of gay rights to distract from and normalize Israel’s occupation, settler colonialism and apartheid.”

The statement, initiated by Palestinian queer groups, recalls the 1969 Stonewall Riots symbolizing LGBTQIA resistance against daily harassment and violence, drawing parallels with the tens of thousands of Palestinians in Gaza protesting, through the Great March of Return, decades of Israel’s violent oppression and denial of fundamental rights.

Since last March, Israeli army snipers have shot and killed more than 200 unarmed Palestinians participating in the protests in Gaza, injuring 18,000 and leaving many with life-changing disabilities in what Amnesty International has described as “deliberate attempts” to kill and maim.

The signatories also call for a boycott of the Israeli government-backed Tel Aviv Pride, which they say is “promoting Eurovision alongside Tel Aviv Pride in order to reap maximum benefits for Israel for an entire month of pinkwashing.”

The signatories include Palestinian collectives al-Qaws for Sexual and Gender Diversity in Palestinian Society, Pinkwatching Israel and Aswat- Palestinian Feminist Center for Sexual and Gender Freedoms, the National LGBT Committee for UNISON, one of the UK’s largest trade unions, ACT UP groups in France and the UK, the Panteras Rosa in Portugal, more than 20 queer and trans groups in the Spanish State and Italy, the Gay Liberation Network, the Methodist Federation for Social Action and Jewish Voice for Peace New York City Queer Caucus in the US.

The statement from LGBTQIA groups follows an outpouring of support for the Palestinian call to #BoycottEurovision2019 in Israel, including artists, former Eurovision winners, contestants and presenters, politicians, trade unions. Tens of thousands have signed a petition urging a Eurovision boycott, and the UK band The Tuts has refused an invitation to enter the Eurovision contest in the UK.

As Palestinian queers, we are heartened by the increasing numbers of LGBTQIA communities taking a stand against Israel’s pinkwashing agenda in a true show of effective solidarity.

LGBTQIA communities are refusing to allow queer and trans liberation to be used by the Israeli regime of oppression as a progressive smoke screen to conceal its violent oppression of Palestinians. They are saying, ‘Our rights are indivisible from the rights of all oppressed communities.’

Joining and promoting the call to boycott Eurovision 2019 in Israel and Tel Aviv Pride help expose the Israeli government's reprehensible co-opting of queer rights as a public relations tool to hide its crimes against Palestinians. They strike a blow to its shameful pinkwashing strategy to maintain its apartheid regime and its decades-old colonization and occupation of Palestine.

For the full list of signatories, see the Pinkwatching Israel web site.