No Art-Washing of Israel’s Massacre in Gaza: Boycott the SERET Film and TV Festival

April 25, 2018
/ By
Palestinian Campaign for the Academic and Cultural Boycott of Israel (PACBI)
/
UK 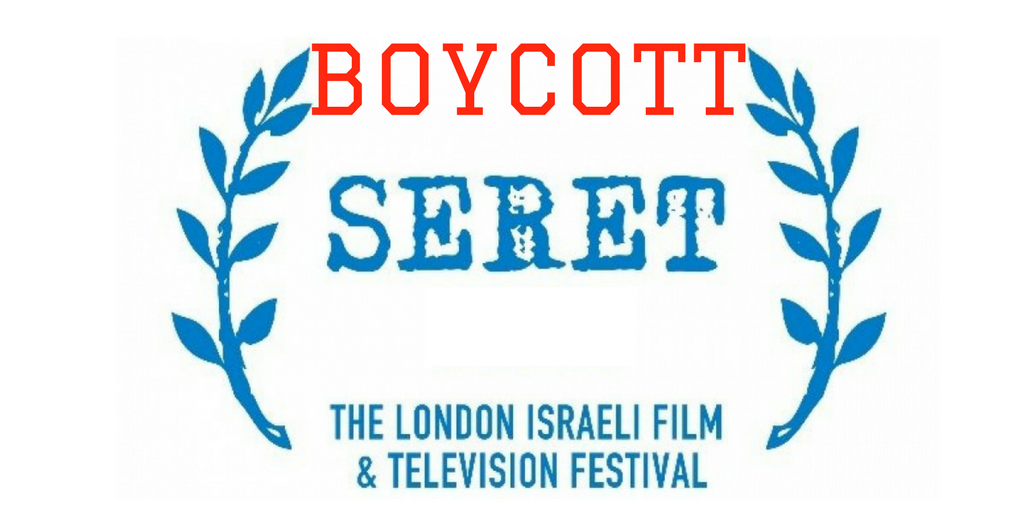 The Palestinian Campaign for the Academic and Cultural Boycott of Israel (PACBI) calls on all participants to withdraw from the Israeli government-sponsored SERET Film and TV Festival taking place in London, Brighton and Edinburgh, from May 6 – 17.

Israel’s decades-old regime of military occupation, settler-colonialism and apartheid desperately needs such propaganda festivals to art-wash its egregious crimes against the Palestinian people. Israeli army snipers are implementing a deliberate shoot-to-kill-or-maim policy in Gaza, killing dozens and maiming thousands of peaceful Palestinian protesters — including children, journalists, women and young men praying — who are demanding nothing more than their UN-sanctioned rights. The International Criminal Court Prosecutor has warned that these murders may constitute war crimes.

In response to Israel’s “atrocities” in Gaza, the Oscar-winning star, Natalie Portman, has boycotted a ceremony in Israel that would have honored her.

The SERET festival tries to falsely project Israel as “a melting pot of cultures, religions and social backgrounds,” rather than as an apartheid and colonial regime that has more than 65 racist laws discriminating against its indigenous Palestinian citizens.

This is straight out of apartheid South Africa’s propaganda playbook and illustrates the way in which Israel uses the arts in the explicit attempt to deflect growing condemnations of its violations of international law and Palestinian human rights.

In addition to Israeli ministries and diplomatic missions, the festival is also sponsored by racist, anti-Palestinian, Israeli government-backed agencies, including the World Zionist Organization and the Jewish Agency. Both play a pivotal role in the strategic and operational planning of racist Jewish-only settlements at the heart of Israel’s illegal land grabs in the occupied Palestinian territory, and by Leumi Bank and Mizrahi Tefahot Bank, both of which finance Israel’s settlement expansion.

Thankfully, people of conscience and supporters of social justice worldwide are seeing through the smokescreen. As Israel’s popularity continued to dip worldwide, thousands of artists, including filmmakers Mira Nair, Ken Loach, John Greyson, The Yes Men and Mike Leigh, have heeded the Palestinian call, refusing to allow their art to be used to conceal Israel’s crimes against the Palestinian people.

Last year, a wave of cancellations and boycotts hit Tel Aviv’s LGBT film festival over Israeli government sponsorship, with a total of fourteen filmmakers, actors and other artists withdrawing or, if unable to do so, declaring support for the boycott.

By not performing or exhibiting their work in Israel and by refusing to take part in Israeli government-sponsored events, artists send Israel a clear message that as long as it continues to deny Palestinian human rights, the cultural community won’t engage in business-as-usual relations with its regime.

PACBI, as part of the growing Nobel Prize-nominated Boycott, Divestment and Sanctions (BDS) movement, calls on filmmakers participating in SERET to withdraw from this blatant propaganda festival and urges people of conscience to boycott it in its entirety.

Help us pull back the curtain on Israel’s crimes and end the impunity that has allowed it to carry on its oppressive and criminal policies for decades. As a first step, refuse to take part in whitewashing them.