Skip to main content
In the News
This article is reposted from
Jewish Voice for Peace
, click here to read the original article. 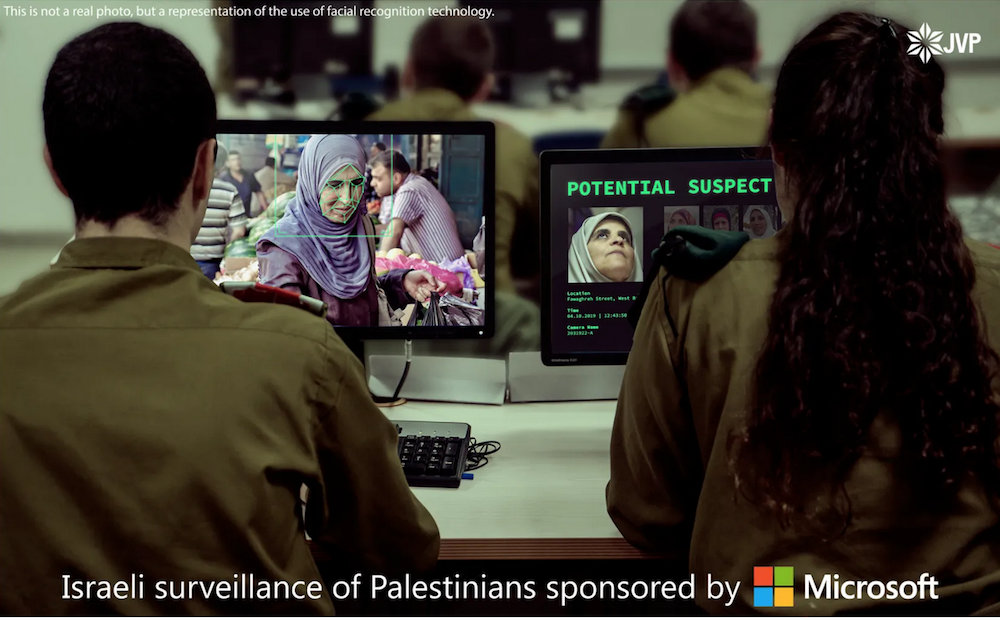 “In late January we went to Microsoft’s headquarters with over 75,000 petitions asking them to stop funding AnyVision. Yesterday they did”

AnyVision’s facial recognition technology is used to enforce Israel’s military occupation of the West Bank, and was funded by Microsoft. The #DropAnyVision campaign called on Microsoft to halt its funding, as investing in a company that field-tests its products on Palestinians at Israeli military checkpoints and though secret surveillance violates Microsoft’s six principles of lawful surveillance.

“At a time when our civil rights are being threatened by authoritarian regimes with access to technology like AnyVision’s facial recognition systems, to have Microsoft walk away from funding them is huge,” said Granate Kim, Communications Director at Jewish Voice for Peace. “In late January we went to Microsoft’s headquarters with over 75,000 petitions asking them to stop funding AnyVision. Yesterday they did.”

Microsoft’s decision to divest from AnyVision is an important victory for tech justice activists and the international community in solidarity with the Palestinian people. This decision by Microsoft, a global leader in tech, also reinforces our belief that government, police, and military cannot be trusted with use of surveillance technology like facial recognition, which is increasingly being used in the U.S. and worldwide to monitor, surveil, and further criminalize Black, brown, immigrant, Palestinian, and Muslim communities.

Omar Barghouti, co-founder of the Boycott, Divestment and Sanctions Movement for Palestinian rights:

Microsoft’s decision to dump AnyVision is a huge blow to this deeply complicit Israeli company and a success for an impressive BDS campaign led by Jewish Voice for Peace. Israel’s war crimes against Palestinians, with the complicity of many corporations like AnyVision, continue despite the threat of the coronavirus, so our resistance to them and our insistence on freedom, justice and equality cannot but continue.

As governments around the world are using the COVID-19 pandemic to justify wide authoritarian measures of mass surveillance, it’s good to see a large corporation such as Microsoft divesting from such a government project. Nowadays, more than ever, we know that just like our health, our civil rights and freedoms are all bound together. Next, let’s demand that Microsoft, a major Homeland Security contractor, divests from the mass surveillance of immigrants in the U.S.!

Customers, employees and shareholders are increasingly aware of the risks of ignoring the impact of new technologies on real people’s lives. That they have come together in the tens of thousands to force Microsoft to drop AnyVision sounds a clear warning to the industry to halt technology that facilitates the creation of Big Brother surveillance states.

In January the #DropAnyVision campaign held a teach-in and petition delivery at the Microsoft campus in Redmond. Organized by Jewish Voice for Peace, MPower Change and SumOfUs, along with community activists and leaders from Redmond and Seattle the activists delivered 75,000 petitions, passed out fliers to Microsoft workers and discussed how Microsoft is violating its own principles of ethics on facial recognition technology. With banners, posters, mobile ads on trucks and speeches from local activists chanting “70 thousand strong say Microsoft is wrong!”, Microsoft workers joined dozens of Palestinian rights activists at the Microsoft campus in hand-deliver the 75,000 petitions.

Ranjan Pradeep, Software Engineer II at Microsoft, explained his participation in the #DropAnyVision campaign in January because"

As a worker at Microsoft, I’m horrified that Microsoft is funding AnyVision. Microsoft President Brad Smith has talked about the dangerous potential of facial recognition – that it can magnify bias and discrimination, intrude on people’s privacy, and encroach on human rights. AnyVision does all three!

Following the launch of the #DropAnyVision campaign by Jewish Voice for Peace, MPower Change and SumOfUs and the explosive NBC investigation Why did Microsoft fund an Israeli firm that surveils West Bank Palestinians?, on November 15th, 2019, Microsoft announced it was launching a third-party audit led by former Attorney General Eric Holder, to determine whether it complies with Microsoft’s ethical principles on how the technology should be used.

On December 4th, 2019, as questions were raised by Microsoft shareholders about the company’s funding of AnyVision during its virtual shareholder meeting, the #DropAnyVision twitterstorm went viral, with hundreds of people tweeting themselves with signs reading: “Surveillance of Palestinians is exploitation, not innovation,” “How can Palestinians ‘consent’ to being surveilled by their occupier?” and “Palestinians don’t have any ‘democratic freedoms’ for Microsoft to ‘safeguard’.”

The DropAnyVision.org campaign called on Microsoft to rescind its $74 million investment in AnyVision, as the company – founded and staffed by members of the Israeli military and security agencies – violates Microsoft’s six principles to guide its facial recognition work. One of these principles is a commitment to “lawful surveillance”: Microsoft will “advocate for safeguards for people’s democratic freedoms in law enforcement surveillance scenarios and will not deploy facial recognition technology in scenarios that we believe will put these freedoms at risk.” Yet AnyVision’s work in the Israeli-occupied West Bank includes running facial recognition scans at Israeli checkpoints and monitoring Palestinian daily life through a network of cameras across the West Bank. In essence, AnyVision operates where democratic freedoms are not only “at risk,” but are actually nonexistent — and, in doing so, it violates Microsoft’s principle of “lawful surveillance.”

Jewish Voice for Peace is a national, grassroots organization inspired by Jewish tradition to work for a just and lasting peace according to principles of human rights, equality, and international law for all the people of Israel and Palestine. JVP has over 500,000 online supporters, over 70 chapters, a youth wing, a Rabbinic Council, an Artist Council, an Academic Advisory Council, and an Advisory Board made up of leading U.S. intellectuals and artists.