#KhanAlAhmar: BDS is Our Most Powerful Tool For Accountability and Justice 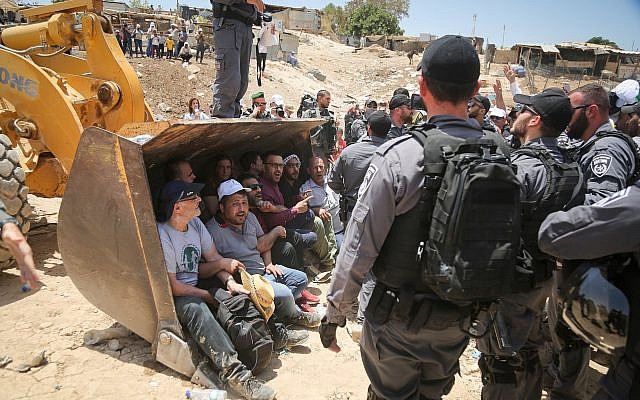 September 10, 2018 — Israel’s ongoing ethnic cleansing continues with the September 5 decision of the Israeli courts in favour of the imminent destruction of Khan al-Ahmar, the Palestinian Bedouin community located east of occupied Jerusalem. The steadfastness of the small community of 200 people in Khan al-Ahmar has become a symbol of our struggle against expulsion and dispossession.

The community had already been driven from its ancestral lands during the Nakba, the large scale ethnic cleansing on which Israel has established itself. Since the end of the 90s, Israel has been undertaking efforts to erase the 18 Bedouin communities in the area east of Jerusalem in order to build a settlement corridor from Jerusalem to the Dead Sea, splitting the occupied West Bank into two parts.

Popular resistance and diplomatic opposition have so far delayed efforts to destroy these communities.

Popular struggle and international solidarity have defended Khan al-Ahmar until today from expulsion, and have stopped the bulldozers manufactured by international corporations from inflicting destruction.

Today, people on the ground keep continued presence at Khan al-Ahmar and gather evidence of corporate complicity in Israel’s ongoing policy of ethnic cleansing of Palestinians. It is the role of the BDS movement to mobilize global pressure against Israel’s impunity in perpetrating war crimes and crimes against humanity and against corporate complicity in these crimes.

Nothing sends as clear a message to Israel as effective BDS campaigning.

As you join the effort to save Khan al-Ahmar and lobby your governments to put concrete pressure on Israel to stop the demolition, remember that Israel’s assaults on Palestinians and our human rights cannot happen without the many corporations that support and profit from Israel’s policies of occupation, colonialism and apartheid.

Many of Israel’s demolitions are being carried out by bulldozers manufactured by the following six companies: JCB (UK), Caterpillar (US), Volvo (Sweden), Hyundai (South Korea), Hitachi (Japan) and LiuGong (China).

Corporations must be made aware that they will lose contracts for lending their service to and profiting from Israel’s policy of demolishing Palestinian homes and communities in order to make room for its illegal settlements on occupied Palestinian land.

The Palestinian BDS National Committee calls for a global civil society effort for preventing the imminent destruction of Khan al-Ahmar. When campaigning for Khan Ahmar and other Palestinian communities at risk of destruction and forcible displacement, we urge everyone to: