AXA is holding its General Assembly on the 28th of April, in Paris. For the occasion, the “Stop AXA Assistance for Israeli Apartheid” coalition and its climate justice allies will contact AXA Customer Service to say insuring Israeli Apartheid is NOT. GREEN. AT. ALL. 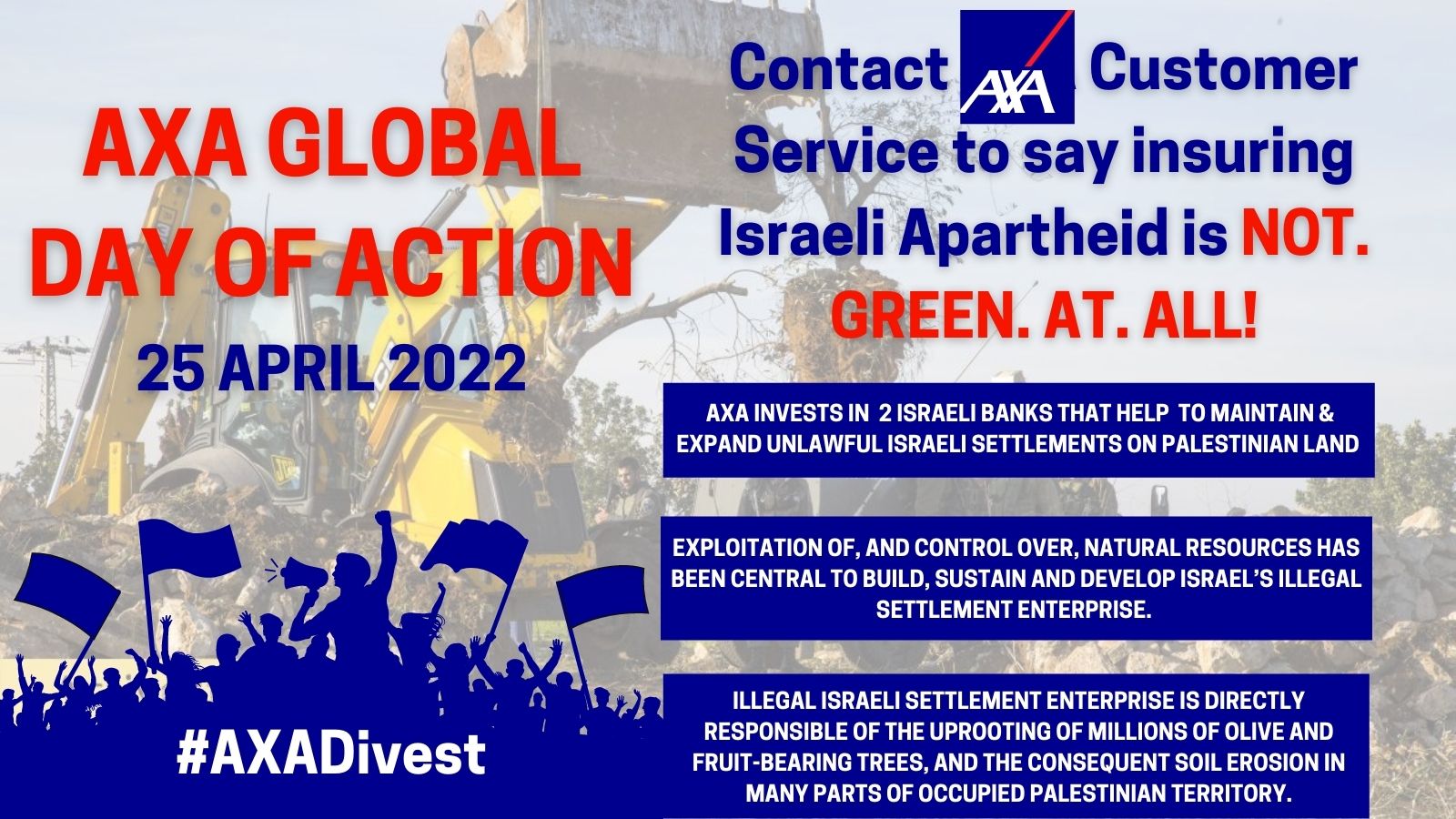 The climate crisis we are living in is the result of centuries of exploitation and oppression through colonialism, patriarchy, white supremacy and capitalism. The most affected populations are from the Global South so far, including the Indigenous Palestinian people. The environmental vulnerability among Palestinians is largely caused and exacerbated by Israel’s decades-old regime of military occupation, settler-colonialism and apartheid.

Israel is only able to maintain its oppressive regime over the Palestinian people because of international complicity.

AXA is one of these complicit international companies.

The French insurer claims to be committed to fighting climate change and positions itself as a champion of sustainability in its business sector. However, these claims are laughable given AXA’s complicity in apartheid Israel’s environmental destruction and war crimes against Palestinians.

On Monday, April 25th,  people across the world are mobilizing for the #AXADivest Global Day of Action.

AXA cares deeply about its image.

Use the sample script below to tell AXA Customer Service that supporting Israeli apartheid is NOT. GREEN. AT. ALL. AXA offers a variety of services, don’t hesitate to call any chapter to share our demand for AXA to end its complicity in Israeli apartheid.

Let us know how your conversation with AXA went using this form.

I understand you are personally not responsible for this, but I kindly ask you to make a note and pass my complaint to AXA’s management.

AXA currently invests in two of the largest Israeli banks, Leumi bank and Israeli Discount Bank, that are listed in the UN database of businesses implicated in Israel’s illegal settlement enterprise in the occupied Palestinian territory, which amounts to a war crime under international law. AXA also invests in a range of international companies doing business with Israeli settlements.

Financial support for illegal Israeli settlements is not only illegal under international law, it also destroys the environment. The systematic exploitation of Palestinian natural resources, including water, land, gas and oil, Dead Sea minerals and stone reserves, creates a coercive environment aimed at driving Palestinian communities from their ancestral land for the benefit of Israel's apartheid economy and illegal settlement expansion.

It’s a very bad look for AXA. I wouldn’t have my family or friends buying insurance policies from AXA while it insures Israeli apartheid and its systematic environmental destruction.

More than 150K people all over the world are calling on AXA to end its support for Israeli apartheid oppressing millions of Palestinians and destroying their nature, lands and livelihoods.

I am extremely disappointed that AXA has failed to take any action to end this complicity, while claiming to stand for climate justice.

*Let us know how your conversation with AXA went using this form.