Skip to main content
In the News
This article is reposted from
Ali Abunima, The Electronic Intifada
, click here to read the original article.

Activists with BDS Gulf, a group that supports the Palestinian-led Boycott, Divestment and Sanctions movement, are strongly condemning a meeting between former Israeli foreign minister Tzipi Livni and a high-ranking representative of Saudi Arabia’s royal family. Livni, who is facing law suits for her role in war crimes during Israel's assault on Gaza in December 2008 and January 2009, tweeted a photo of herself with former Saudi intelligence chief Prince Turki al-Faisal at the World Economic Forum, the annual gathering of global elites at the Swiss resort of Davos. BDS Gulf said the meeting in Davos was part of “repeated and escalating violations” of the boycott of Israel. 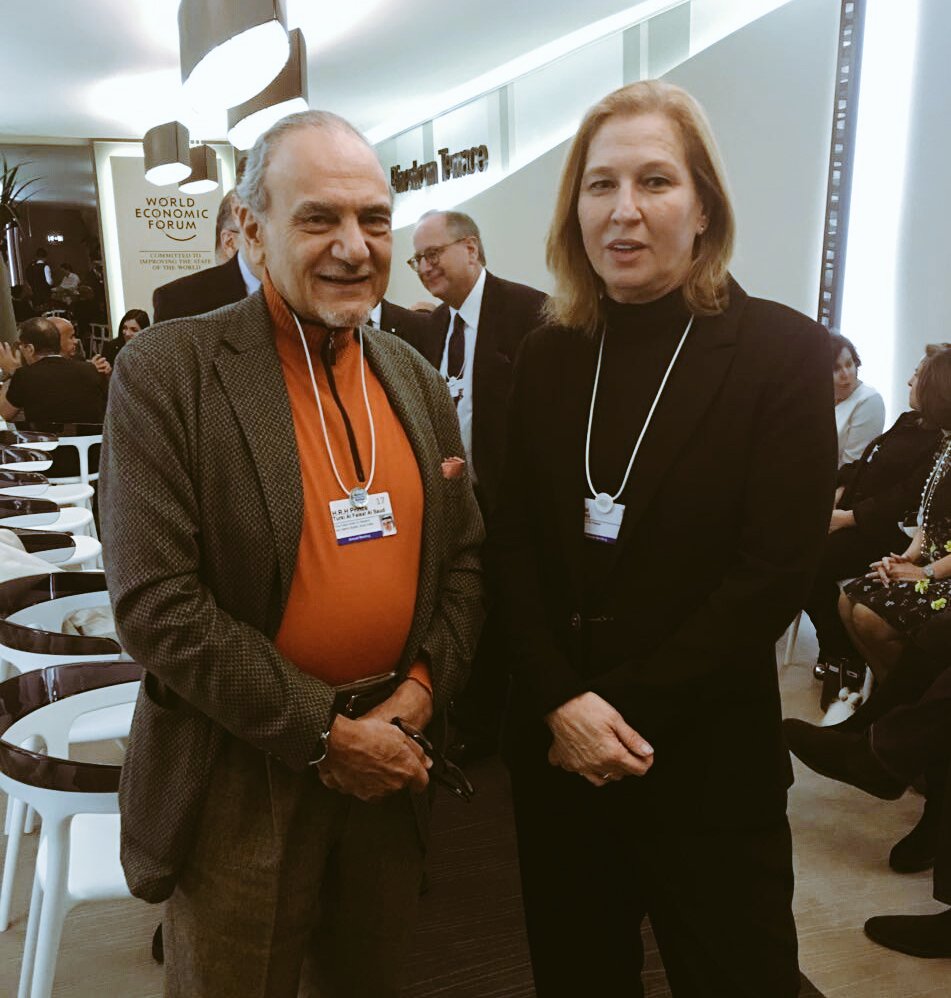 Livni tweeted a photo of herself with former Saudi intelligence chief Prince Turki al-Faisal at the World Economic Forum, the annual gathering of global elites at the Swiss resort of Davos.

In contrast to her busy schedule in Davos, Livni has been forced to cancel a visit to Brussels scheduled for this week, because Belgian authorities want to question her in an investigation of her role in war crimes during Israel’s attack on Gaza in December 2008 and January 2009.

BDS Gulf, an activist group that supports the Palestinian-led boycott, divestment and sanctions campaign, said the meeting in Davos was part of “repeated and escalating violations” of the boycott of Israel.

“What compounds our concern and dismay is that this violation is not the first of its kind by Turki al-Faisal and others, but is part of a series of flirtations between the prince and Zionist officials,” BDS Gulf added.

Turki al-Faisal has been leading a rapprochement between Israel and Saudi Arabia rooted in their common hostility toward Iran. This warming embrace included a high-level delegation to Israel led last summer by former Saudi general Anwar Eskhi.

In May, al-Faisal held a public discussion with former Israeli national security advisor Yaakov Amidror at the Washington Institute for Near East Policy, a think tank affiliated with the Israel lobby group AIPAC.

A recent report by one of Israel’s most influential think tanks – headed by Yadlin – noted the growing ties with Saudi Arabia and other Gulf regimes as one of the positive regional trends for Israel.

But it recognized that Israel’s ongoing occupation and abuses of the Palestinian people is an obstacle to forging more open ties with Gulf states given that public sentiment in these countries still strongly supports the Palestinian cause.

The close ties between Saudi Arabia and Israel also provide context for understanding Israel’s relatively benign view of and assistance to al-Qaida’s Saudi-backed affiliate in Syria, Jabhat Fateh al-Sham – which is seen as a counterweight to the Iranian-supported Lebanese resistance group Hizballah.

Livni’s tweet also caused embarrassment in Jordan, where despite the country’s 1994 peace treaty with Israel, there remains almost universal popular opposition to normalization of ties.

A source at the Jordanian foreign ministry told local media that the country’s foreign minister Ayman al-Safadi had met Livni “in passing” at a seminar on the question of Palestine and had not held a “bilateral” meeting with her.

In 2014, Livni told US National Public Radio that Israel shared the same “values” as such “moderate” autocracies as those in the Gulf. But she lamented that it was not possible at the time to be public about Israel’s growing relationships with their rulers.

Many social media users in the region retweeted Livni’s tweet along with expressions of dismay.

“We affirm as citizens of Gulf states and as people of conscience our firm and categorical rejection of any official or quasi-official effort to normalize relations with the entity,” BDS Gulf said, using a term for Israel that is commonly employed in the Arab world to deny it recognition.

The group urged the Saudi government to put an end to these violations of “our people’s basic parameters.”

BDS Gulf also condemned what it called secret arms deals between Israel and the United Arab Emirates. Last summer it was reported that the UAE bought top secret Israeli spyware to eavesdrop on the personal communications of dissidents.

“These normalization initiatives by Saudi Arabia, the United Arab Emirates and other Gulf states will not pass without rejection and resistance by all sectors of Gulf society,” BDS Gulf said. “We call on our people in the Gulf to escalate boycott campaigns against Israel and to increase pressure on their governments to conform to the principles of the boycott and the directions of Gulf peoples who reject normalization.”