Thanks to sustained international pressure, Palestinian human rights defender and BDS coordinator Mahmoud Nawajaa was released after being held without charge by Israel for 19 days. 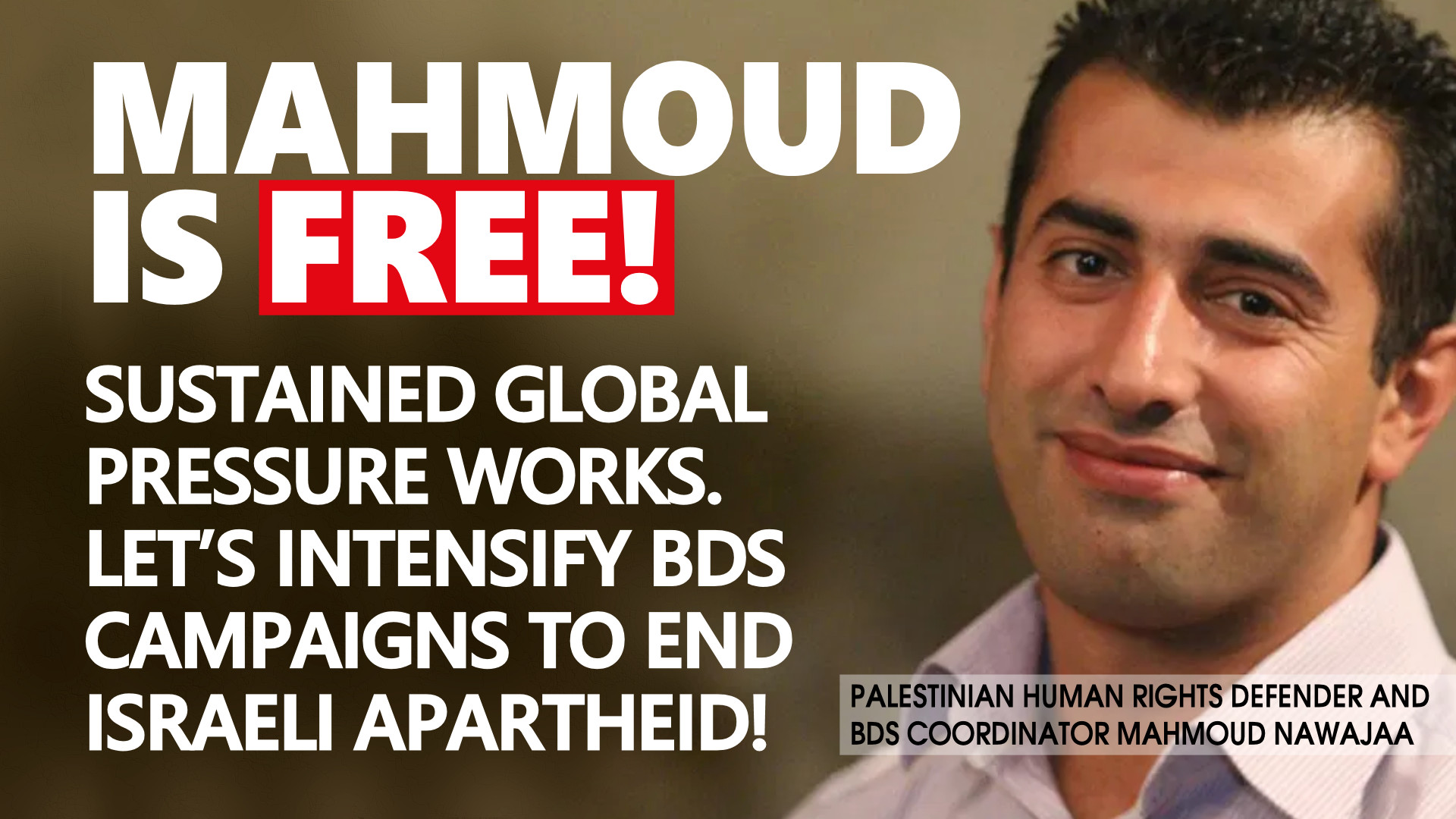 August 17, 2020 -- Today, Palestinian human rights defender and BDS coordinator Mahmoud Nawajaa was released by an Israeli military court, after 19 days of illegal detention without charges. Since his arrest on July 30, the Israeli internal security Shin Bet has failed to present any formal charges against him.

In his first reaction after being released, Mahmoud Nawajaa said:

“Pressure works. Sustained global pressure works even better. I thank Addameer for defending me against this military ‘justice’ system that is part and parcel of the apartheid and colonial regime against our people.

“I am deeply grateful to all those who pressured apartheid Israel to release me. From Europe and the Arab world, to Southern Africa, Latin America, North America and Asia, your solidarity gave me strength and kept alive my hope to be reunified with my loving family and my inspiring wider BDS family.

“BDS is an idea, and an effective, morally-consistent, anti-racist strategy of peaceful resistance and solidarity. They cannot break us because they cannot crush an idea or counter our strategy, despite all the financial, intelligence, political, diplomatic and propaganda resources they’ve invested in their war of repression against BDS.

“Let’s intensify our BDS campaigns to bring to an end this system of apartheid and oppression and free all 4,700 Palestinian prisoners. With our global networks of mutual solidarity with movements for Indigenous, racial, social, gender and climate justice, we can and we shall achieve freedom, justice and equality for our people and for all oppressed communities.”

In its statement calling for the immediate and unconditional release of Nawajaa, Amnesty International exposed attempts in the West, coordinated with Israel, to suppress BDS activism. It said:

“Advocating for boycotts, divestment and sanctions is a form of non-violent advocacy and of free expression that must be protected. Advocates of boycotts should be allowed to express their views freely and take forward their campaigns without harassment, threats of prosecution or criminalization, or other measures that violate the right to freedom of expression.”

As part of the international campaign to #FreeMahmoud, last Tuesday the Palestinian BDS National Committee, the largest coalition in Palestinian civil society, organized two protest rallies in Ramallah and Gaza in front of diplomatic missions of Germany, the current president of the EU Council. More than 150 representatives of Palestinian mass movements, trade unions, political parties and BDS activists joined the rallies, demanding that EU apply concrete pressure on Israel to release Nawajaa and respect Palestinian rights under international law.