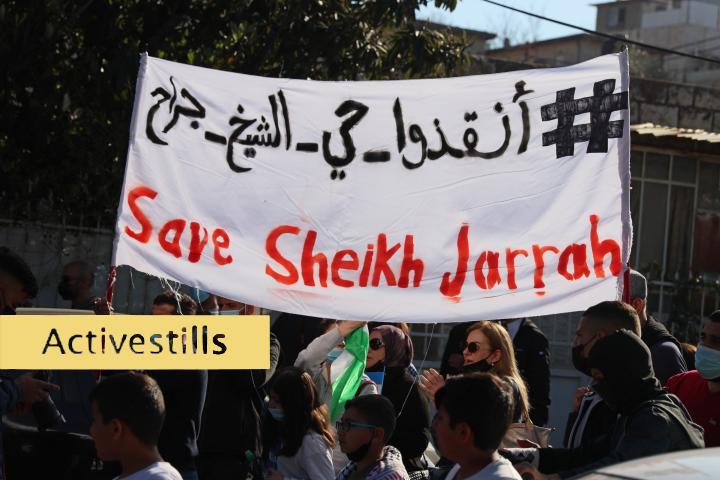 Over the last number of weeks Palestinian protests to #SaveSheikhJarrah, in occupied East Jerusalem, have grown in size. They have been met with brutal repression by Israeli apartheid security forces, including police officers trained in Israel’s police training academy partially owned by G4S and Allied Universal.

Indigenous Palestinian residents of Sheikh Jarrah have fought lengthy legal battles in Israeli courts against eviction orders which would see them ethnically cleansed, forcefully evicted from their homes, and replaced with illegal Israeli settlers.

At the beginning of May, Israeli settlers submitted their response to the rightful claims of the residents of Sheikh Jarrah to the Israeli court, an apparatus of Israel's apartheid regime.

The Palestinian families were then given time to reach an “agreement” with the settlers regarding the right to their homes. Sheikh Jarrah belongs to the Palestinian families. It is part of the occupied Palestinian territory, and therefore any Israeli settler presence in it amounts to a war crime under international law. Israel’s settlement enterprise is an integral part of its apartheid system against all Palestinians.

The Israeli court decision to give a period of time to "both sides'' to seek a compromise and reach an agreement is colonial gaslighting. It is also a tactic used to exhaust the ongoing protests and public pressure to #SaveSheikhJarrah. More protests are scheduled to take place over the coming days, and residents vow to remain steadfast.

In Silwan, another East Jerusalem neighbourhood, extremist settlers backed by the Israeli state want to take over the homes of seven Palestinian families who are also fighting lengthy legal battles in Israeli courts.

In occupied Jerusalem, Israel keeps a 60:40 demographic ratio between Jews and Arabs. All ‘excess’ Palestinians are under threat of forced transfer.

In Jerusalem, the government’s plan for the municipality, including both the west and occupied east of the city, sets the goal of “maintaining a solid Jewish majority in the city” and a target demographic “ratio of 70% Jews and 30% Arabs”—later adjusted to a 60:40 ratio after authorities acknowledged that “this goal is not attainable” in light of “the demographic trend."

Watching from afar Israel’s brutal violence against unarmed Palestinian protestors defending their homes and dignity can evoke feelings of anger mixed with powerlessness. We have proven before that collective action in the form of #BDS works best to express true and effective solidarity. Here are 9 actions you can take to fight Israeli impunity and #SaveSheikhJarrah