Dr. Ruchama Marton is a distinguished Jewish-Israeli civil society leader, a psychiatrist, feminist and the Founder and President of Physicians for Human Rights – Israel (PHRI). She has spoken out about why she is convinced that the BDS movement is critical to ending Israeli crimes against the Palestinian people. 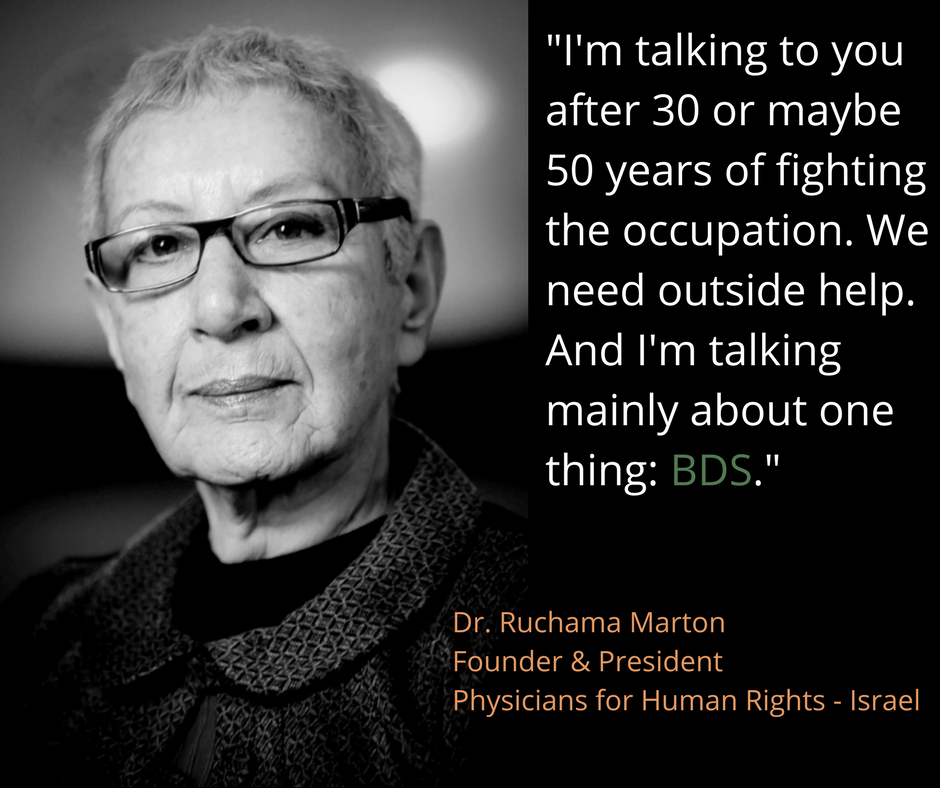 October 2017 — Dr. Ruchama Marton is a distinguished Jewish-Israeli civil society leader, a psychiatrist, feminist and the Founder and President of Physicians for Human Rights – Israel (PHRI). After speaking last month out about why she, after decades of human rights work, is convinced that the Boycott, Divestment and Sanctions (BDS) movement is critical to ending Israeli crimes against the Palestinian people, the very organization she founded distanced itself from her, failing to share in her principled commitment and courage to end apartheid.

We at the Palestinian BDS National Committee (BNC) welcome and salute Dr. Marton’s solidarity. Her work to end racial segregation, military occupation and apartheid will not be forgotten, and we are confident that her efforts will form part of a wave that will usher forth the freedom, justice and equality that we seek.

In the past, Dr. Marton has also openly spoken about witnessing Israeli soldiers murder prisoners and cover up their crimes, aided by Israeli journalists and newspapers.

Below are excerpts from a recent interview with Dr. Ruchama Marton:

“I’m talking to you after 30 or maybe 50 years of fighting the occupation. We need outside help. And I’m talking mainly about one thing: BDS.”

"A human rights organization that is not willing to fight for [equal political rights for Palestinians] is howling at the moon. It is meaningless."

"Without [ensuring] political rights you continue to be a colonialist, an occupier, an apartheidist."

Q: You are very critical of the Israeli Left and the way it confronts the occupation.