If AXA wants to stop being complicit in gross human rights violations and respect its climate change and biodiversity strategy, it must divest from Israeli apartheid! 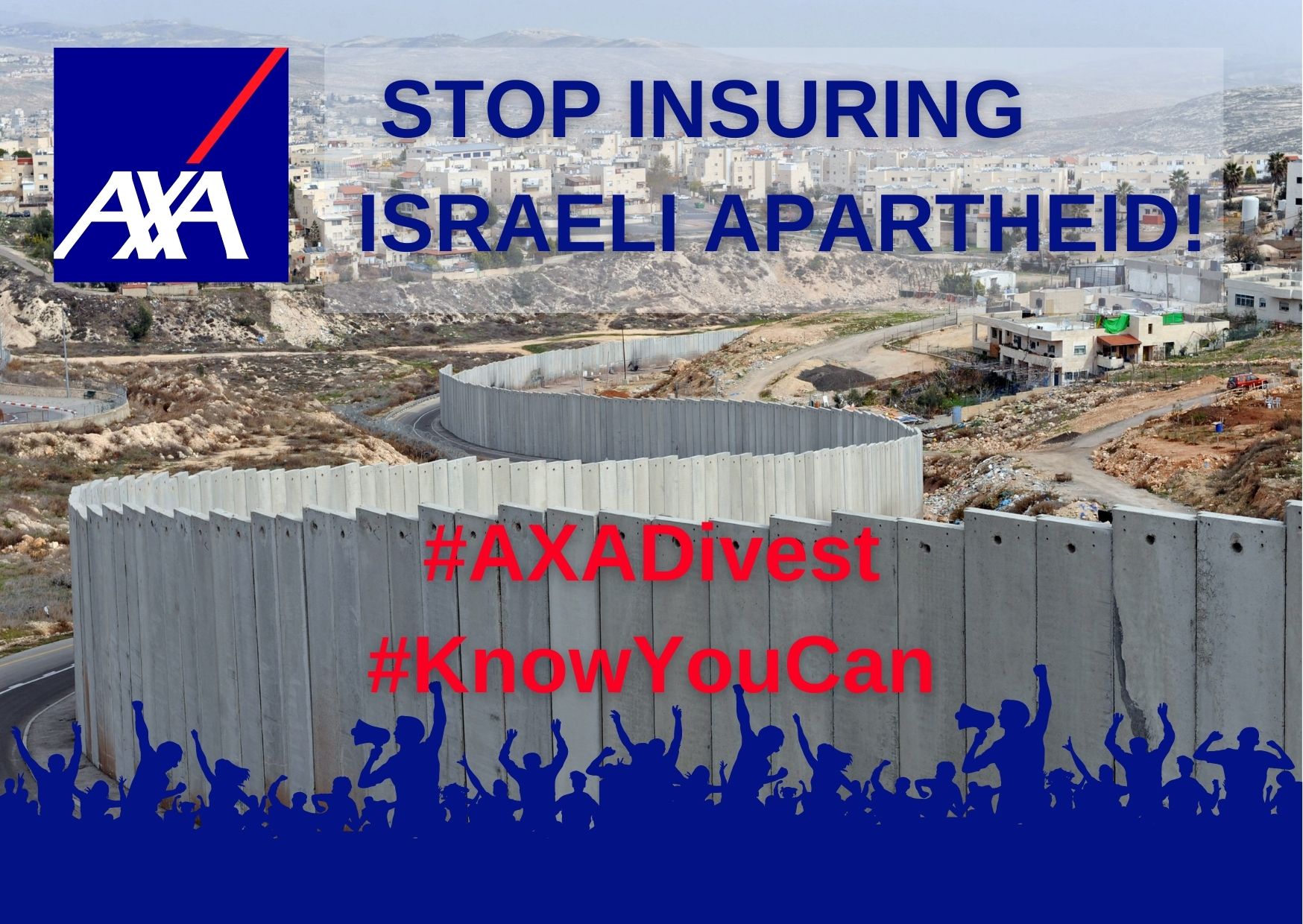 For several years now, an international movement has been calling on AXA to stop its investments in Israel's apartheid regime. Major milestones have been achieved, among them the December 2018 decision taken by AXA IM to sell its shares in Israel’s military manufacturer, Elbit Systems. In 2021, AXA sold almost all of its shares in Equitable Holdings which used to invest in Elbit Systems and five of the main Israeli banks - all listed in the UN database of businesses that are complicit in illegal Israeli settlements, which constitute a war crime in international law. Israel uses settlements to steal Palestinian land and water resources as a policy to induce ethnic cleansing.

In 2021, more than 250 organisations and 10,000 individuals pledged to boycott the French insurer until it complies with its declared principles and human rights. Dozens have already cancelled their AXA insurance policy.

A shocking new report from the coalition "Don't Buy Into Occupation" confirms that AXA is one of the biggest European investors in Israel’s illegal settlement enterprise, also showing that the insurer still owns shares worth US$6.2 million in two Israeli banks involved in war crimes.

Warfare is a pillar of Israel’s economy and one of the world’s most polluting industries.

Sign the petition to pressure AXA to end complicity in financing war crimes and environmental crimes!

Israeli settlements are not only illegal, they also destroy the environment.

Israeli settlements are mainly built on confiscated Palestinian agricultural or grazing lands, ancestral lands for olive trees: a primary source of food and income for Palestinians. Since Israel’s 1967 military occupation of Gaza and the West Bank, including East Jerusalem, nearly 1 million Palestinian olive trees have been uprooted and destroyed.

Israel dumps 80% of its illegal settlements’ waste in the occupied Palestinian territory, contaminating all Palestinian natural resources – including water. 97% of drinking water in Gaza is unfit for consumption and is a leading cause of child mortality.

These are the consequences of an apartheid regime on people and the planet that AXA endorses through its investments.

Companies involved in Israeli war crimes are feeling the heat. French multinational Veolia completely withdrew from Israel after a BDS campaign over its role in Israel’s colonisation of Palestinian land cost it billions of dollars in lost contracts and tenders.

Together, We can make AXA do the same if we ramp up the pressure!