October 28, 2020
/ By
Palestinian Campaign for the Academic and Cultural Boycott of Israel (PACBI) and wider BDS movement
/

Join the discussion with students and academics organizing against Israeli apartheid as well as against privatization, climate catastrophe, racism, sexism and militarization of campuses. 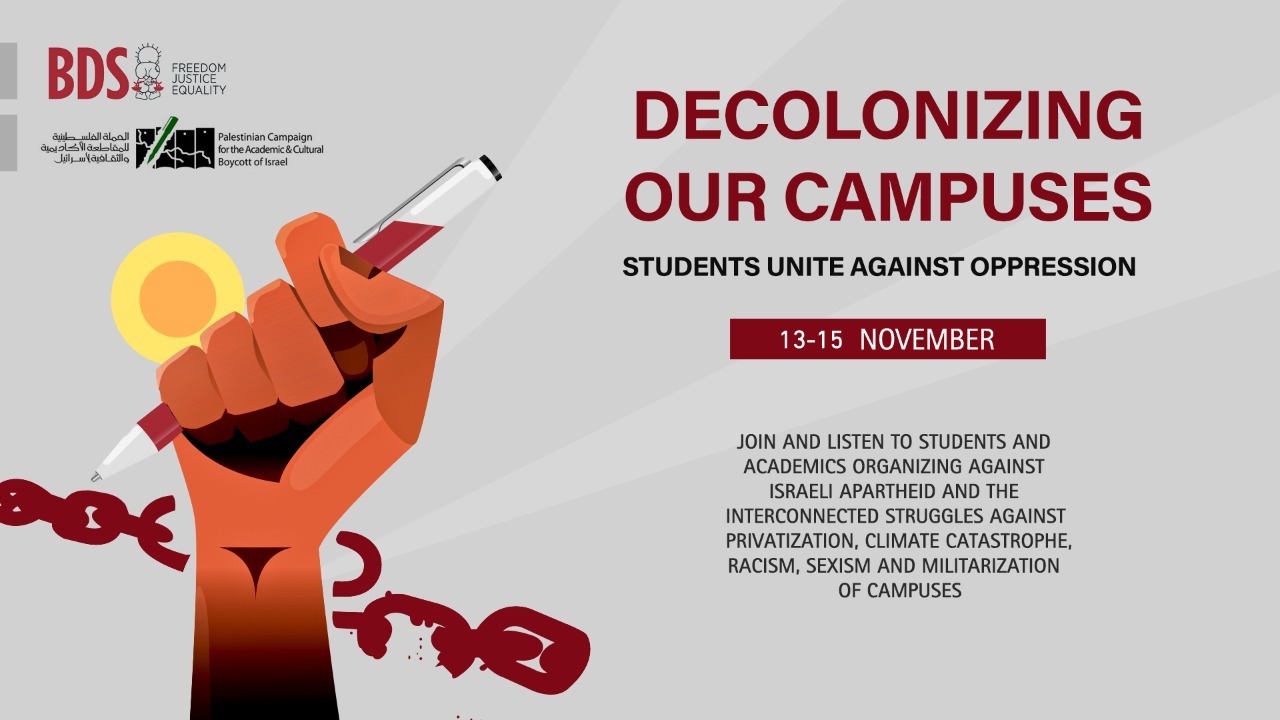 This year has brought forth unprecedented challenges globally as an unequal world grapples with a global pandemic. This pandemic has laid bare deep divides that are built upon centuries of structural oppression- of racism, colonialism, neoliberal capitalism, patriarchy and climate catastrophe.

Students across the world are at the forefront of not just reimagining a different and more just world, but also in actualizing it. In the past decades, they have worked to raise awareness of Israel’s apartheid, and have led campaigns for academic and cultural boycott of Israel. Students globally have also shaped struggles against privatization of education, against hetero-patriarchy and plundering of our environment. In the array of students’ struggles, we see the real meaning of intersectionality and true internationalism.

We invite you to join us for a three-day conference to reflect upon ongoing student struggles and challenges in organizing. Decolonizing our Campuses: Students Unite Against Oppression is being organized by the Palestinian Campaign for Academic and Cultural Boycott of Israel and the wider BDS movement  from November 13th to 15th. Join the discussion with students and academics organizing against Israeli apartheid as well as against privatization, climate catastrophe, racism, sexism and militarization of campuses.

*Translation will be provided to Arabic and Spanish

Dr. Rafeef Ziadah is a Palestinian academic, poet and activist. She will introduce and moderate the panel.

Drashti Brahmbhatt organized with the Brown Divest campaign calling upon Brown University to divest from companies complicit in Israel’s apartheid and occupation. She is now pursuing a Masters in Urban and Social Policy at Columbia University.

Anwar N. is a Palestinian-Italian student and activist. She is part of the Progetto Palestina student group at the University of Turin promoting the academic boycott of complicit Israeli universities.

Camila Mattar Hazbun is a lawyer with a degree in Human Rights from the Universidad Austral de Chile. She is a third generation Palestinian descendant born in Valdivia, Chile and is active in the Arab Youth for Palestine of Valdivia and BDS Chile.

Nick Estes is an Assistant Professor in the American Studies Department at the University of New Mexico and co-founder of The Red Nation. He will introduce and moderate the panel.

Ajamu Amiri Dillahunt is an activist and PhD Student at Michigan State University.

Shaeera Kalla is former SRC president at Wits University and co-organizer of Fees Must Fall.

Maria Santiago is a student at the Universidad Complutense de Madrid and organizer of the Apartheid Free Zone campaign.

Linda Tabar is a professor at Birzeit University and author of the forthcoming book "Palestine, Memory, Decolonization: Native Encounters with Modernity and Imaginaries of Liberation.”

Dima Khalidi is the founder and director of Palestine Legal. She will introduce and moderate the session.

Helberth Choachi is a teacher and Coordinator for Degree in Education with Emphasis on Human Rights, Faculty of Education, National Pedagogical University, Bogotá, Colombia