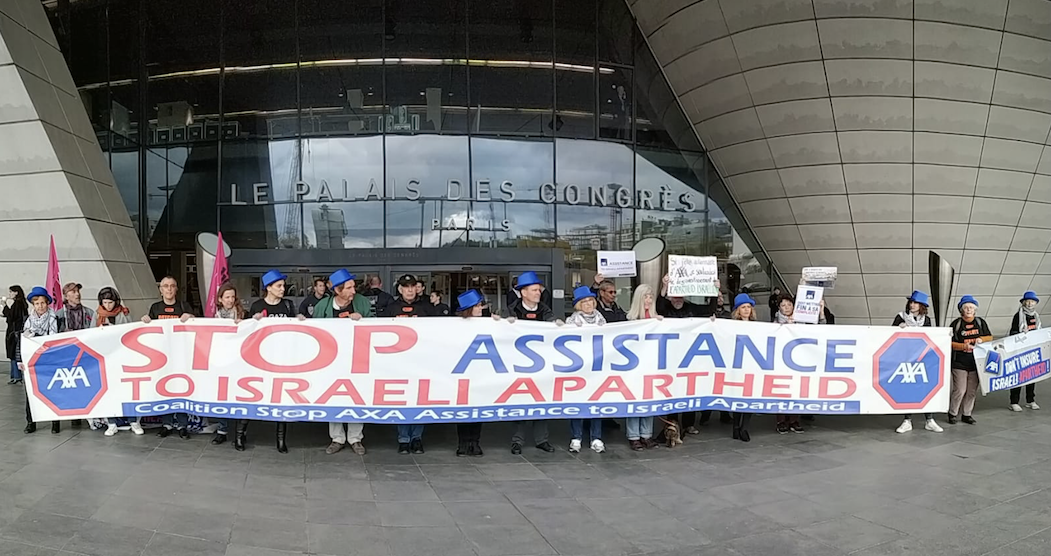 April 24, 2019, Paris - This afternoon, before AXA’s Annual General Meeting (AGM) at the Palais des Congrès in Paris, over 50 activists from the Coalition to Stop AXA Assistance to Israeli Apartheid gathered outside, and called on AXA to divest from Israeli apartheid.

Though French police tried to ban the protest and deny rights of assembly and free speech, activists managed to stay in front of the Palais des Congrès for over 20 minutes holding a 10-metre-long banner reading “Stop AXA Assistance to Israeli apartheid."  Speeches were made by Jean-Guy Greilsamer de Union Juive Français pour la Paix, Olivier Schulz and Imen Habib from BDS France, Alys Samson from the BDS National Committee, and Verveine Angeli from Solidaires. Activists also wore blue hats, the colour of AXA, and said that  if they were AXA shareholders, they would call to end these investments.

Before having to leave due to police repression, dozens of informational leaflets documenting AXA’s unethical investments were handed out to shareholders.

Even though, thanks to grassroots mobilisation, one of AXA’s subsidiaries, AXA IM, recently divested from Elbit Systems, the campaign against AXA’s unethical investments will continue until AXA no longer finances the Israeli banks that fund  Israel’s settlements and fully divests from Elbit Systems, which tests weapons on the Palestinian people.

Supporting the Paris protest, today many supporters of freedom, justice and equality for Palestinians worldwide joined in a tweetstorm calling on AXA to end its investments in Israeli banks and Elbit Systems. Using AXA’s #ProudToBeAXA hashtag, they affirmed that the French insurer cannot be proud of its activities until AXA ends its role in the oppression of the Palestinian people.