June 21, 2012
/ By
We Divest
/
United States
Pension fund giant TIAA-CREF has removed Caterpillar, Inc. from its Social Choice Funds portfolio. As of May 1, 2012, financial data posted on TIAA-CREF’s website valued Social Choice Funds shares in Caterpillar at $72,943,861. Today it is zero. “We applaud this decision,” said Rabbi Alissa Wise, Director of Campaigns at Jewish Voice for Peace and National Coordinator of the We Divest Campaign (www.wedivest.org).

“We applaud this decision,” said Rabbi Alissa Wise, Director of Campaigns at Jewish Voice for Peace and National Coordinator of the We Divest Campaign (www.wedivest.org). “It’s long past time that TIAA-CREF began living up to its motto of ‘Financial Services for the Greater Good’ when it comes to the people of Israel and Palestine.”

Since 2010, We Divest has been urging TIAA-CREF to drop Caterpillar and other companies profiting from and facilitating Israel’s 45-year-old military occupation and colonization of the Palestinian West Bank, East Jerusalem, and Gaza Strip.

“By selling weaponized bulldozers to Israel, Caterpillar is complicit in Israel’s systematic violations of Palestinian human rights,” said Rabbi Wise. “We’re glad to see that the socially responsible investment community appears to be recognizing this and is starting to take appropriate action.”

Caterpillar has come under increasing criticism from human rights organizations in recent years for continuing to supply bulldozers to Israel, which uses them to demolish Palestinian civilian homes and destroy crops and agricultural land in the occupied territories, and to build illegal, Jewish-only settlements on Palestinian land.

In the coming weeks, many will be watching the Presbyterian Church (USA) General Assembly taking place in Pittsburgh, where church commissioners will vote on a motion to divest from Caterpillar and two other companies, Motorola Solutions and Hewlett-Packard, that remain in TIAA-CREF’s Social Choice Funds.

Last month, Friends Fiduciary, a Quaker institution, divested $900,000 worth of shares in Caterpillar stating: “We are uncomfortable defending our position on this stock.”

What Others are  Saying

Omar Barghouti, Palestinian human rights activist and founding member of the BDS movement said, “CAT is out of the bag of TIAA-CREF’s socially responsible companies thanks to the inspiring campaign waged by JVP and its partners, with vision, persistence and tactical skillfulness. Palestinian civil society, represented by the BDS National Committee (BNC), deeply appreciates these efforts and believes that more pressure will ultimately convince TIAA-CREF to fulfill its basic moral obligation to finally divest from CAT and all other corporations that are complicit in Israel’s grave and escalating violations of international law and human rights.”

Cindy and Craig Corrie, Rachel Corrie’s parents said, “For nearly a decade, we have witnessed human rights abuses committed with Caterpillar equipment in the West Bank and Gaza and have joined thousands who have asked the company to stop supporting these actions.  We are hugely gratified that TIAA-CREF has taken this step.  When governments and corporations avoid responsibility, we must refuse to profit from their abuses. Our family salutes and thanks TIAA-CREF for this decision that moves all of us closer to accountability.”

Jennifer Bing, Middle East Program Director of the Chicago office of the American Friends Service Committee, a member organization of the We Divest Campaign Coordinating Committee, said, “As a TIAA-CREF client institution which has divested from Caterpillar ourselves, we are encouraged to see this first, great step toward creating a complete occupation-free portfolio that my colleagues and I are eager to have as an investment option.”

Samia Shafi of Adalah-NY, a member organization of the We Divest Campaign Coordinating Committee, said,  “This small, positive first step shows that TIAA-CREF is not immune to pressure for human rights for Palestinians. Our We Divest Campaign will continue pressuring TIAA-CREF until we win full divestment from all companies in TIAA-CREF’s portfolio that profit from violations of Palestinian human rights.”

Anna Baltzer, National Organizer with the US Campaign to End the Israeli Occupation — a coalition of more than 380 organizations around the country — and a member group of the We Divest Campaign Coordinating Committee, stated: “After years of Caterpillar refusing to change its practices, we are gratified that the U.S. corporation and others like it are seeing that support for Israel’s occupation and apartheid policies comes at a dear cost. There can be no more business as usual with such institutions. The tide is turning.”

·      The Presbyterian Church (USA)’s Mission Responsibility Through Investment Committee (MRTI) attempted unsuccessfully to negotiate with Caterpillar before calling for selective divestment. MRTI’s report on engagement with companies on Israel/Palestine-related issues noted that:

Caterpillar’s complicity in non-peaceful pursuits led the 2010 General Assembly to denounce the company’s profiting from involvement in human rights violations. Sadly, despite significant support for the shareholder resolution calling for a review of its human rights policy, Caterpillar has become even more intransigent. It has cut off all communication with the religious shareholders. Caterpillar continues to accept no responsibility for the end use of their products.

·      In 2004, Amnesty International urged Caterpillar to take action in response to the documented use of its bulldozers to violate international law in the occupied territories, noting that “thousands of families have had their homes and possessions destroyed under the blades of the Israeli army’s US-made Caterpillar bulldozers.”

·      Human Rights Watch, the UN High Commissioner for Human Rights, and the Presbyterian Church USA have all made similar recommendations to Caterpillar, to no avail.

·      In 2003, a Caterpillar bulldozer driven by an Israeli soldier killed American activist Rachel Corrie while she nonviolently protested the demolition of Palestinian homes in the town of Rafah, in Gaza. 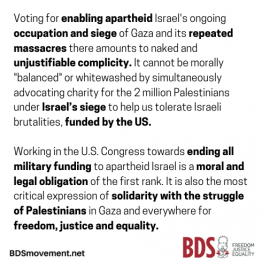