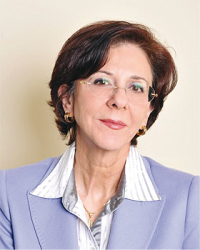 Dr. Rima Khalaf, Executive Secretary of the United Nations Economic and Social Commission for Western Asia (ESCWA) from 2010 to 2017

March 17, 2017 - Earlier today, Dr. Rima Khalaf, Director of the United Nations Economic and Social Commission for Western Asia (ESCWA), resigned from her post following pressure from the US and Israel over a report issued this week by ESCWA documenting Israel's apartheid policies towards the Palestinian people and encouraging support for the grassroots boycott, divestment and sanctions (BDS) movement for Palestinian rights and freedom. Dr. Khalaf explained her decision stating: “I resigned because it is my duty not to conceal a clear crime, and I stand by all the conclusions of the report.”

The fact that a UN Secretary General has bowed to threats and intimidation from the Trump administration to protect Israel from accountability, yet again, is hardly news. The real news is that this time round, Israel, with all its influence in Washington, cannot put
the genie back into the bottle.

ESCWA’s historic report has set two landmark precedents on Palestine. It is the first time any UN agency has established through a scrupulous and rigorous study that Israel has imposed an apartheid regime against the entire Palestinian people. Also, ESCWA’s advocacy of BDS as the most effective way to hold Israel accountable for its war crimes has set an important precedent in the US-dominated UN system.

Palestinians are deeply grateful to ESCWA’s director, Dr. Rima Khalaf, who preferred to resign in dignity than to surrender her principles to US-Israeli bullying. At our darkest moment of Israel’s escalating repression, including of nonviolent human rights defenders, ongoing theft of Palestinian land, and worsening apartheid policies, Palestinians are hopeful that this groundbreaking report heralds the approaching dawn of a new era where Israel's regime of injustice will be held accountable through sanctions and other measures, as was done against apartheid South Africa.

The Palestinian BDS National Committee (BNC) is the largest coalition in Palestinian civil society that leads and supports the global Boycott, Divestment and Sanctions movement. Visit www.bdsmovement.net and follow @BDSmovement