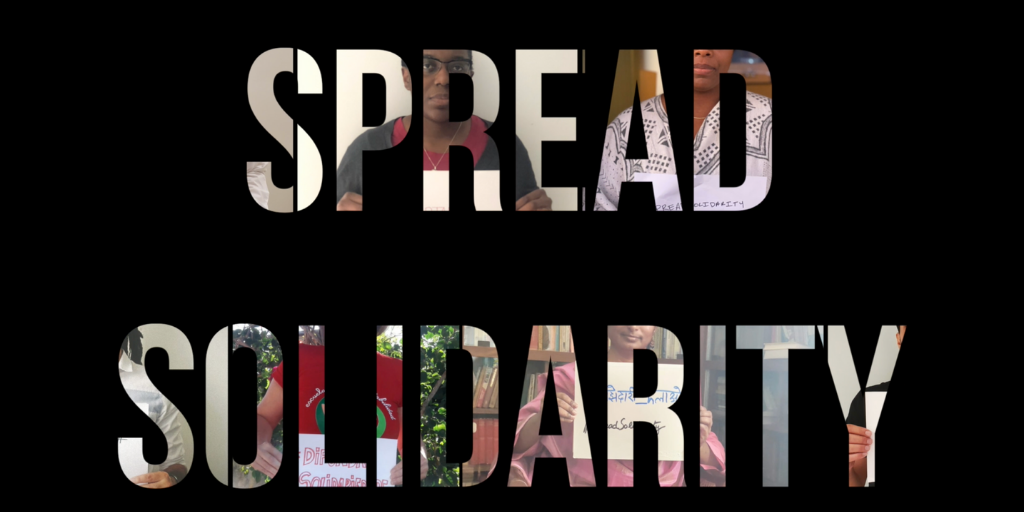 In a new video released today, seventeen leading racial justice activists, environmentalists, trade unionists, feminists, artists and academics from around the world call for solidarity in order to build a more just and dignified world, and defeat the racism and other injustices exposed by COVID-19.

The video was created by the Palestinian-led Boycott, Divestment and Sanctions (BDS) Movement for freedom, justice and equality for the Palestinian people.

It highlights how the COVID-19 pandemic has disproportionately impacted oppressed communities worldwide. Leading activists join together in the video to oppose the racism, authoritarianism, warfare, denial of human rights, and disaster capitalism which have made COVID-19 so devastating, and have heightened repression globally, including against the powerful Black Lives Matter protests taking place in the United States now. To counter these oppressive forces, they unite their voices in a call to #SpreadSolidarity and fight for racial, economic, gender, Indigenous, social and climate justice.

The video emphasizes that justice will require putting people before profits and realigning priorities everywhere to divest from the military-security complex and invest in health, education, climate protection, dignified jobs and true human security.

As Black Americans and other distressed communities worldwide mobilize to end racism and repression, this video aims to help envision and work to realize justice, dignity and rights for all. We believe that the Palestinian struggle for freedom and justice is intertwined with global justice struggles of other oppressed communities. The COVID-19 crisis demonstrates these intersections and provides an opportunity for global mobilisation in support of racial, Indigenous, social, economic, gender and climate justice.