Under a month ago, campaigners launched a call to boycott AXA. Already 6,400 individuals and 300+ organizations pledged to boycott AXA, and many people have canceled their AXA insurance policies.

Every day Israel entrenches its apartheid regime over the Palestinian people - seizing more Palestinian land, demolishing more homes, tightening its cruel siege on Palestinians in the Gaza Strip, and jailing Palestinians who protest.

If enough of us get together we can stop this shameless profiteering from Israeli apartheid. AXA invests $7 million in three Israeli banks banks that finance illegal Israeli settlements in the occupied Palestinian and Syrian territory (Golan Heights) through mortgages to settlers and financial services for settlement construction.

Less than a month ago, campaigners launched a call to boycott AXA until it ends its assistance to Israeli apartheid. Already 6,400 individuals and 300+ organizations have pledged to boycott AXA, and many people have canceled their AXA insurance policies. We are close to reaching our first goal of 10,000 boycott pledges. We are also looking for more organizations that use insurance and are ready to commit not to use AXA’s services.

If you haven’t already, pledge now to boycott AXA

Help us spread widely our pledge to boycott AXA

Israel steals Palestinian land and destroys Palestinian homes and communities to build its settlements. Without the international complicity of corporations like AXA these illegal projects would not see the light of day.

Tell AXA to protect lives, not endanger them

Many organizations and groups such as Viva Salud, Globalize Solidarity, Sabeel-Kairos UK and the Benedictine University have already signed the pledge to boycott AXA. 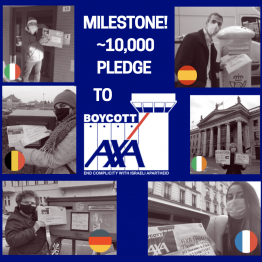