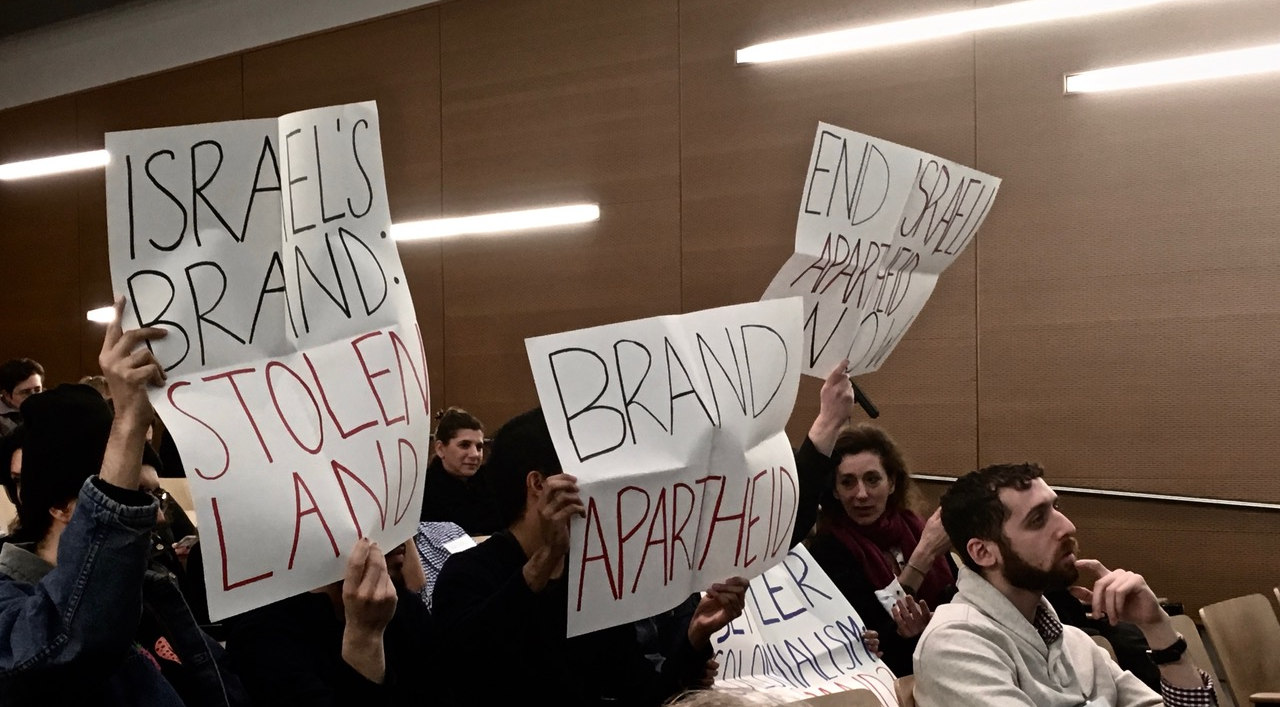 With signs reading “Israel’s Brand: Stolen Land” and “Brand Apartheid,” the five NYU undergraduate students shuffled into the conference room and sat close to the front of the room, waiting for keynote speaker Aharoni to begin his closeout of NYU’s Places As Brands Conference before unfurling their signs.

The room was dismayed by the protest but the students remained steadfast, keeping their signs held high throughout Aharoni’s talk, despite attempts by a conference organizer to remove them.

“The whole purpose of [Brand Israel] is to gloss over any crimes and indelicacies in Israel’s image across the world,” Leen Dweik, an organizer with the New York University chapter of Students for Justice in Palestine (NYU SJP) told Mondoweiss. “It’s very reductive and for me that’s the whole problem with this Brand Israel thing is that it acts as if the occupation is just a circumstance of where they are, not something that they themselves have created and perpetuated and now need to cover up.”

“Brand Israel” is an Israeli government public relations strategy initiated in 2005 by the Israeli government, with the support of US ad agencies like Young & Rubicam. Rather than choosing to improve Israel’s global standing by ending its violations of Palestinian rights, Brand Israel aims to “to improve the country’s image abroad — by downplaying religion and avoiding any discussion of the conflict with the Palestinians” and representing the country “as relevant and modern rather than only as a place of fighting and religion.”

Aharoni explained Brand Israel in 2005, saying, “What the Americans are telling us loud and clear is that they don’t want to hear more about the conflict.” Outlining the Brand Israel strategy after one of Israel’s military assaults on Gaza, Arye Mekel, one of Aharoni’s colleagues at the Ministry of Foreign Affairs, told the New York Times, “We will send well-known novelists and writers overseas, theater companies, exhibits …This way you show Israel’s prettier face, so we are not thought of purely in the context of war.”

Prior to enrolling as a graduate student at NYU, Shusterman served in the Israeli Prime Minister’s office as a media analyst and communications monitor, as well as a fellow at the pro-Israel advocacy group Stand With Us.

Shusterman failed to provide a comment as of press time. (She promised she would comment, so still waiting on it).

The event and catered after-party were funded by American businessman Ira Rennert, who has contributed many dollars to some of the most vehement and right-wing settlements. According to an investigation conducted by Israeli daily Haaretz, Rennert has donated 2.3 million shekels, approximately $630,000, to the notorious settler group Elad. Elad is committed to settling some of the most ideological Israelis in East Jerusalem’s Palestinian neighborhoods like Silwan, as well as leading archaeological excavations aimed at establishing strictly Jewish connections to Jerusalem. Rennert has been a defendant in high profile industrial pollution cases in Peru and Utah (and owns a controversial house in the Hamptons that covers 63 acres of beachfront).

Ahmed Hafezi, an organizer with NYU SJP and one of the protesters, said the conference comes at a time when Israel is under unprecedented global scrutiny for its complicity in the 50-year long occupation of Palestinian lands. Such conferences, he said, serve as a counterweight to the growing success of the Boycott, Divestment and Sanctions (BDS) movement.

“Precisely because Israel is increasingly being put in an isolated situation in the global climate, they have to respond to that by coming up with new and innovative strategies,” Hafezi told Mondoweiss. “So that’s why we see this as particularly important.”

“This for us is a flashpoint instance of all of these things coming together; they’re really just showing their cards. And we don’t think that we can let this kind of stuff fly on campus,” added Hafezi.

The development of Brand Israel was lead by Ido Aharoni while he served with Israel’s Ministry of Foreign Affairs. Brand Israel aims to re-brand Israel as a place of progressive values, forgoing its distinction as a place of constant conflict and strife. The strategy was developed in conjunction with Israel-friendly leaders of American public relations and marketing firms.

“Your image, your performance as a brand, is part and parcel with your national security,” he told the audience.

While developing the strategy with Israel’s Foreign Ministry, Aharoni said, he reached out to the “other side” in an attempt to  build their brands together, but to no avail.

“Why would an oppressed Palestinian care about all the tech companies you have when they don’t have the basic access to electricity, water and their legal rights? When their house could be demolished tomorrow?” Dweek asked sardonically, after the group left the conference. “It’s so preposterous.”

Aharoni elaborated further, noting that Israel’s re-branding success was fundamentally based on accepting the realities of the conflict—of the occupation—and softening those realities by changing narrative.

Itay Barylka of NYU’s Jewish Voice for Peace chapter said that the conference made it clear Brand Israel has no intention of allaying human rights concerns related to its ongoing occupation of Palestine.

“It was pretty transparent that they can acknowledge the situation there is inexcusable and say actually we’re not even going to try to excuse it, we’re actually going to be totally transparent about the fact that there’s apartheid in occupied Palestine, and we’re actually just going to totally build in parallel to that,” Barylka told Mondoweiss after the conference.

“[They built] this commodified national image that can integrate human rights violations and normalize them and make them part of the status quo. I think they were really transparent about that being the point.”