The largest national organization representing farmers in India announced that it has joined the BDS movement. 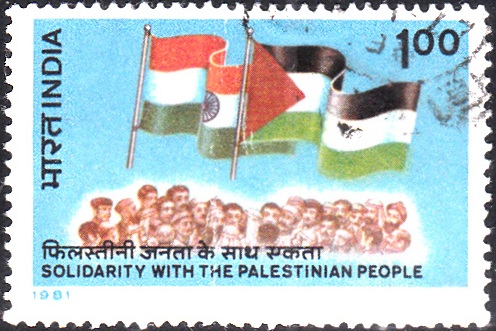 Indian stamp from 1981 expressing solidarity with the Palestinian people.

October 23, 2017 — Earlier this month, the largest national organization representing farmers and agricultural workers in India, All India Kisan Sabha (AIKS), has announced that it has joined the BDS movement. AIKS is is spread across 21 states in India and is over 16 million members strong.

AIKS has resolved to:

Grassroots movements in India, Palestine and beyond are working to defeat the violent wave of right-wing politics plaguing our world today. By joining the BDS movement, AIKS is saying no to the hateful politics of Prime Minister Modi, Netanyahu and Trump, and joining us to build a more free, just and equal world.

All India Kisan Sabha (AIKS) was formed in 1936, before India's independence from British colonialism. It played a critical role in mobilizing farmers and agricultural workers to end British imperialism.

More recently, AIKS has actively resisted the corporate takeover of Indian agriculture and the two decades of neoliberal policies which have led to massive indebtedness and farmer suicides.