We hope these quotes by leading figures in culture, academia, politics, and struggles for justice about our movement for Palestinian rights will inspire you to support BDS on its 15th anniversary 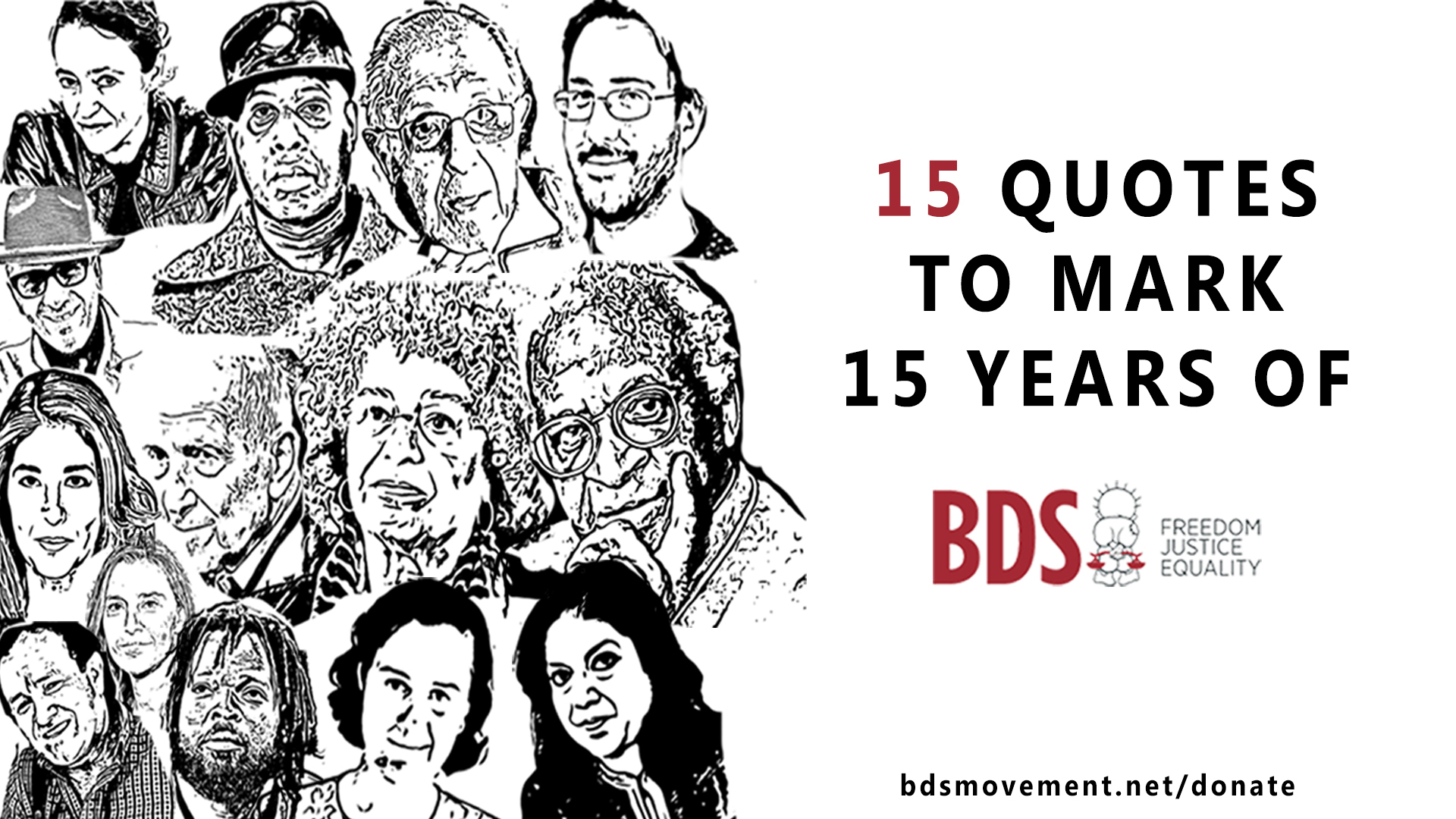 With your support, the BDS movement for Palestinian rights has grown worldwide and played an unparalleled role in further isolating Israel’s regime of occupation, settler-colonialism and apartheid at the grassroots level around the world.

We hope that the following quotes by diverse, leading figures -- in culture, academia, politics as well as in social and racial justice struggles -- about our movement and the struggle for Palestinian rights will inspire you to increase your support for BDS on its 15th anniversary. Your donation will be an important contribution to help us continue the struggle for Palestinian freedom, justice, and equality.

Palestinian activists have long supported the Black people’s struggle against racism. When I was in jail, solidarity coming from Palestine was a major source of courage for me. In Ferguson, Palestinians were the first to express international solidarity. … We have a profound responsibility to support Palestinian struggles.

Just as we said during apartheid that it was inappropriate for international artists to perform in South Africa in a society founded on discriminatory laws and racial exclusivity, so it would be wrong for Cape Town Opera to perform in Israel.

[BDS] campaigns around the world present the most promising way to overcome the failure of world governments to stand up to Israel’s intransigence and lawless behavior.

Just as it was in the case of the international call against South Africa in the apartheid years, we are confident that [BDS] will be effective in contributing to international pressure on Israel to abandon its oppression and expulsion of the indigenous population.

--Vina Mazumdar, Arundhati Roy, Aijaz Ahmad, Vivan Sundaram, and tens of other leading academics and artists who signed the Indian Call for the Academic & Cultural Boycott of Israel

We, the undersigned Latin American artists, declare that from this moment on we will reject any invitation made to us to appear in Israel or in any event financed by this government that leads to the ‘normalization’ of apartheid....

The best strategy to end the increasingly bloody occupation is for Israel to become the target of the kind of global movement that put an end to apartheid in South Africa.

Israel is an apartheid state with over 50 laws on the books that sanction discrimination against the Palestinian people.

--Movement for Black Lives (US)

In our short stay here we have seen and heard enough to conclude that Apartheid has been reborn here. In its reborn form it is however worse than its predecessor. Even during the worst days of Apartheid we did not have walls to divide and control people.

I do not want to cross the picket line formed by Palestinian civil society, which has asked everyone who wants to change the situation to not cooperate with organizations that are in any way complicit with the Israeli state.

There are occasions when merely having your name added to a concert schedule may be interpreted as a political act that resonates more than anything that might be sung ...

Boycotting, divesting and sanctioning are peaceful solutions to the crisis that destroys Palestinian homes and lives. … It worked to make South Africa a fairer and more equal nation and it could work in Israel.

The three main goals of BDS – ending the occupation, full equality to the Arab citizens of Israel and the right of return of Palestinian refugees – adhere to international law.... We are shocked that demands for equality and compliance with international law are considered anti-Semitic.

--240 Jewish & Israeli scholars, responding to the Bundestag’s attack on BDS in 2019

The EU stands firm in protecting freedom of expression and freedom of association in line with the Charter of Fundamental Rights of the European Union, which is applicable on EU Member States' territory, including with regard to BDS actions carried out on this territory.