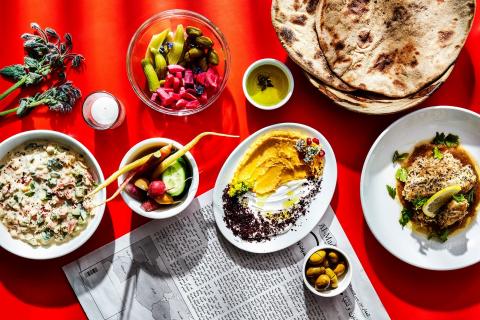 We in the food industry have come together to fight for our collective humanity and freedom in many ways: kicking misogynists out of our restaurants; fighting the criminalization and deportation of immigrants we cook, harvest, and live with; rallying behind indigenous water protectors and land defenders...

What we do matters-- and also what we refuse to do.

Thus this letter: initiated by a group of Jewish, Palestinian, and Asian American women, it has garnered a long list of signatures by Cambodian, Caribbean, Latinx, Indigenous, South Asian, Arab, Black, white, straight, queer & other members of our culinary community here in the U.S and Puerto Rico.

The attack in Pittsburgh is what real anti-Semitism looks like in its deadly violence and horror. Anti-semitism has historically been foundational to right-wing and fascist movements targeting vulnerable communities throughout the world, going back hundreds of years.

We cannot ignore the larger history and global systems of which the shootings in the U.S. are a part.

More than half a century ago, when four young girls were killed in a Birmingham church by a racist’s bomb, Dr. King told us that those little girls “have something to say to every politician who has fed his constituents with the stale bread of hatred and the spoiled meat of racism…. They say to us that we must be concerned not merely about who murdered them, but about the system, the way of life, the philosophy which produced the murderer.”*

*Excerpted from: In Response to Pittsburgh, We Must Come Together as One: We stand with the victims of every white-supremacist and racist and anti-Semitic assault back through history. By Phyllis Bennis and Rev. Dr. William J. Barber II