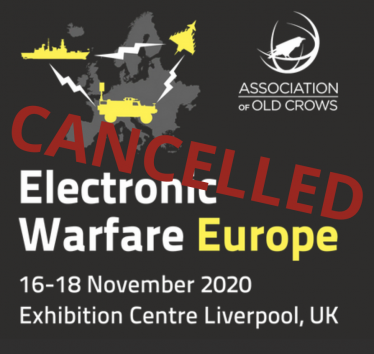 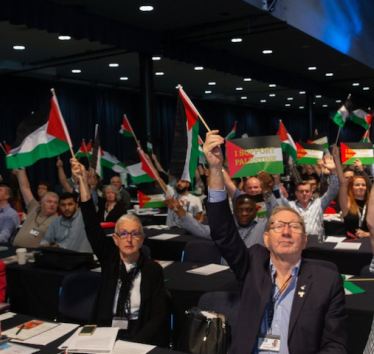 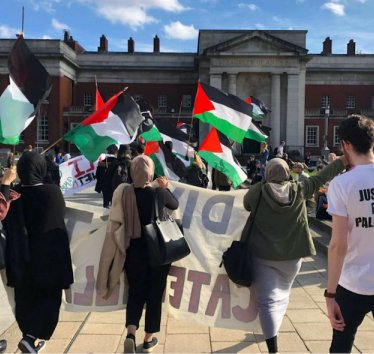 Palestine solidarity activists, Stop G4S campaigners and a Danish member of parliament combined to take over the annual general meeting of G4S in London Thursday afternoon and focused the spotlight on the security company’s complicity in human rights abuses against Palestinians and others.

Stop G4S
June 9, 2013
By:
Amena Saleem at Electronic Intifada
In the News

Over the last few years, the Israeli government has been running a marketing campaign, ‘Brand Israel’, with a particular eye on gay tourism. Although there is a financial incentive in attracting the ‘pink pound’ to Israel, the key element has been to present an alternative image of Israel .

August 10, 2012
By:
Sarah Colborne on Mondoweiss
In the News

The reasons behind the decision by the WLWA to exclude Veolia are commercially confidential but the impact of human rights campaigners should not be under-estimated.

Occupied Palestine, 15 September 2011 - The Palestinian Trade Union Coalition for BDS (PTUC-BDS), the broadest and most representative alliance of Palestinian trade and professional unions, salutes the Trades Union Congress (TUC), representing 6.5 million workers in the UK, for their most recent policy in support of Palestinian human rights.

Veolia continues to pay a high price for aiding Israel’s occupation, as it loses yet another contract

In another victory for Palestinian rights, Ealing Council, in London , has failed to select Veolia for a comprehensive tender for its domestic refuse, street cleaning and parks maintenance contract. The contract is worth approx £300m in total over 15 years and one of Ealing Council’s largest single contracts.

August 3, 2011
By:
By Palestinian Solidarity Campaign
In the News

A local London newspaper, the Wimbledon Guardian, has today (7 May 2011) reported that only two bidders remain in the race for a £1bn (€1.14) contract in South London – neither of which are Veolia.

Ben Soffa, Secretary of the Palestine Solidarity Campaign, said: ‘Local activists and PSC branches organised a really vocal campaign to oppose awarding this contract to a company that is complicit in Israel’s illegal occupation.

The Palestinian Boycott, Divestment and Sanctions National Committee (BNC), of which all of Palestinian trade union federations are members, warmly welcomes the recent passing of a motion at the UK Trades Union Congress (TUC) that sets out plans for boycotting the products of and divesting from Israeli and international companies that are implicated in Israel's occupation and colonial settlements.