Urge Cara Delevingne to Take Her Stand for Justice to Puma

June 25, 2020
/ By
Palestinian Campaign for the Academic and Cultural Boycott of Israel (PACBI)
/ 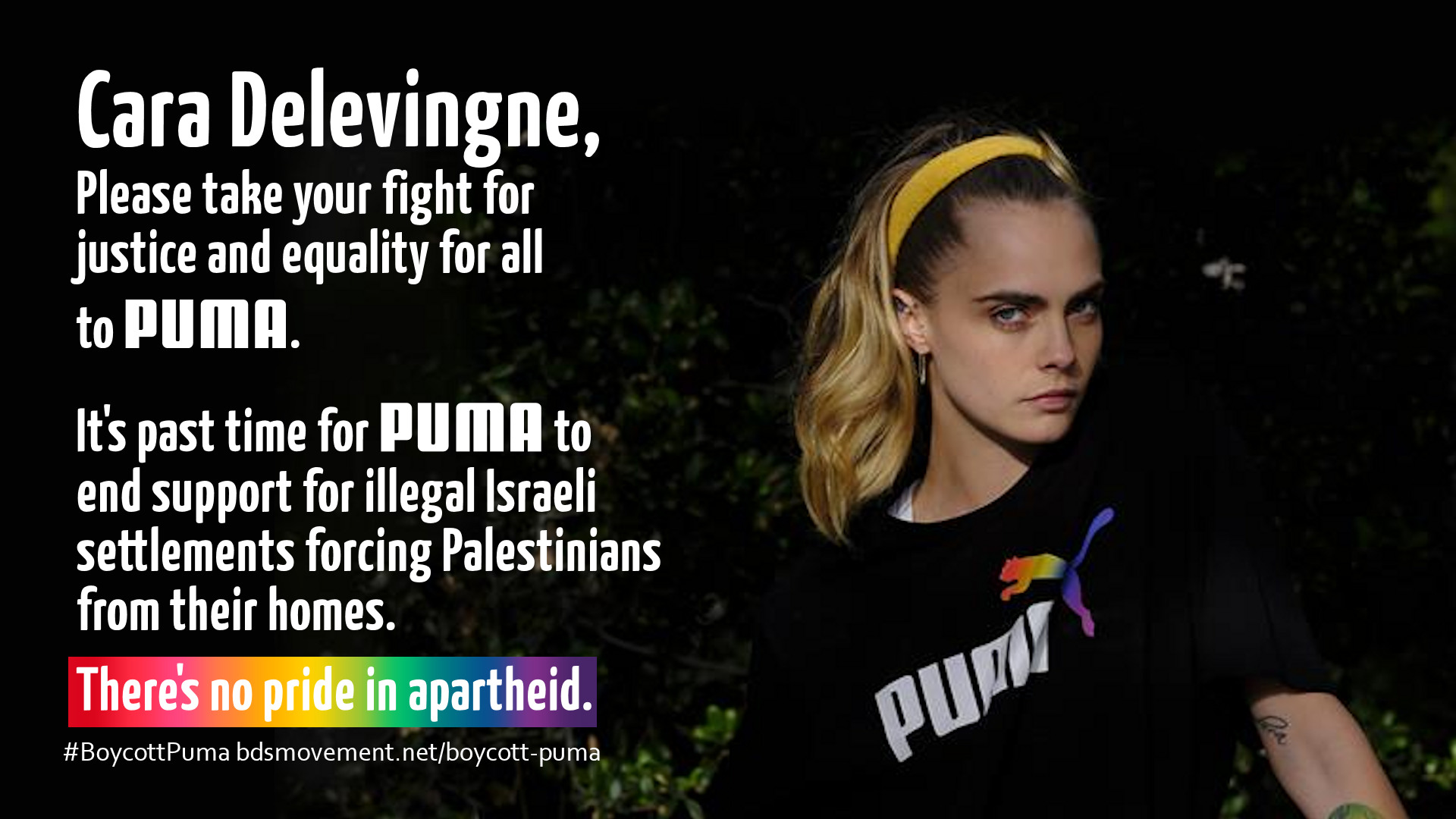 British model and actress Cara Delevingne is known for using her platform to advocate for justice and equality for all.

She is an advocate of LGBTQIA+ rights and gender justice.

She has condemned institutionalized racism, joining Black Lives Matter protests in Los Angeles this month and echoing calls to #DefundPolice.

She has drawn the parallels between today’s Black-led global uprising against racism and the June 27, 1969 Stonewall uprising, when Black Trans woman Marsha P. Johnson led the revolt against police harassment of and violence against queer communities.

Let’s thank Cara Delevingne, brand ambassador for Puma, for advocating for justice and urge her to join us in telling Puma to end support for Israeli apartheid.

Puma supports illegal Israeli settlements forcing Palestinian families from their homes. Settlements are illegal land grabs under international law. They rob Palestinians of natural resources and create obstacles for Palestinians to access clean water and healthcare, making them even more vulnerable during a pandemic.

There’s no pride in apartheid. There is no love in denying the fundamental rights of an entire people because of who they are.

Cara Delevingne says she is “proud to be a part of a generation who is persistently fighting for equality.”

Urge Cara Delevingne to take the fight for equality to Puma

Cara Delevingne has a voice within Puma.

As Israel pushes forward imminent plans to illegally annex parts of the occupied Palestinian territory, including the illegal settlements that Puma supports, we need her to use that voice for equality for all. We need her to call on Puma to end all support for Israel’s illegal land grabs.

I'm with you, @Caradelevingne, in the fight for equality for all!

No pride in apartheid. #PrideMonth #BoycottPuma

Cara Delevingne
June 25, 2020
/ By
Palestinian Campaign for the Academic and Cultural Boycott of Israel (PACBI)
/