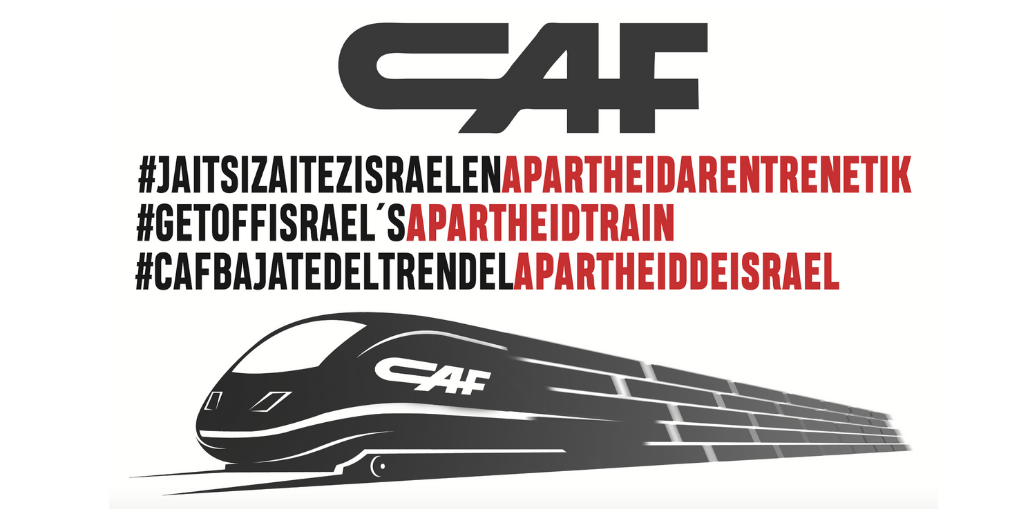 * Available in Spanish and Basque

Ahead of CAF’s shareholders meeting on June 13, demand that the corporation ends its role in Israel’s illegal Jerusalem Light Rail project, which enables the ongoing annexation of the occupied Palestinian territory.

On June 13 the Basque firm CAF will hold its annual shareholders meeting. We must ensure that CAF's involvement in Israel’s violation of Palestinian human rights and international law is on the agenda.

CAF’s AGM coincides with announced plans by the extremist Israeli government to formally annex a critical part of the occupied Palestinian West Bank from July 1.

Shapir, CAF's Israeli partner for the JLR project, is in the UN database of complicit companies with which economic relations should be terminated due to their violation of international law.

We will not stay silent. We have 13 days until CAF’s AGM, let’s make sure CAF gets our message!

From June 1 to June 13 we want to make a lot of noise! Use your networks to mobilize and raise awareness. Please do the following:​ 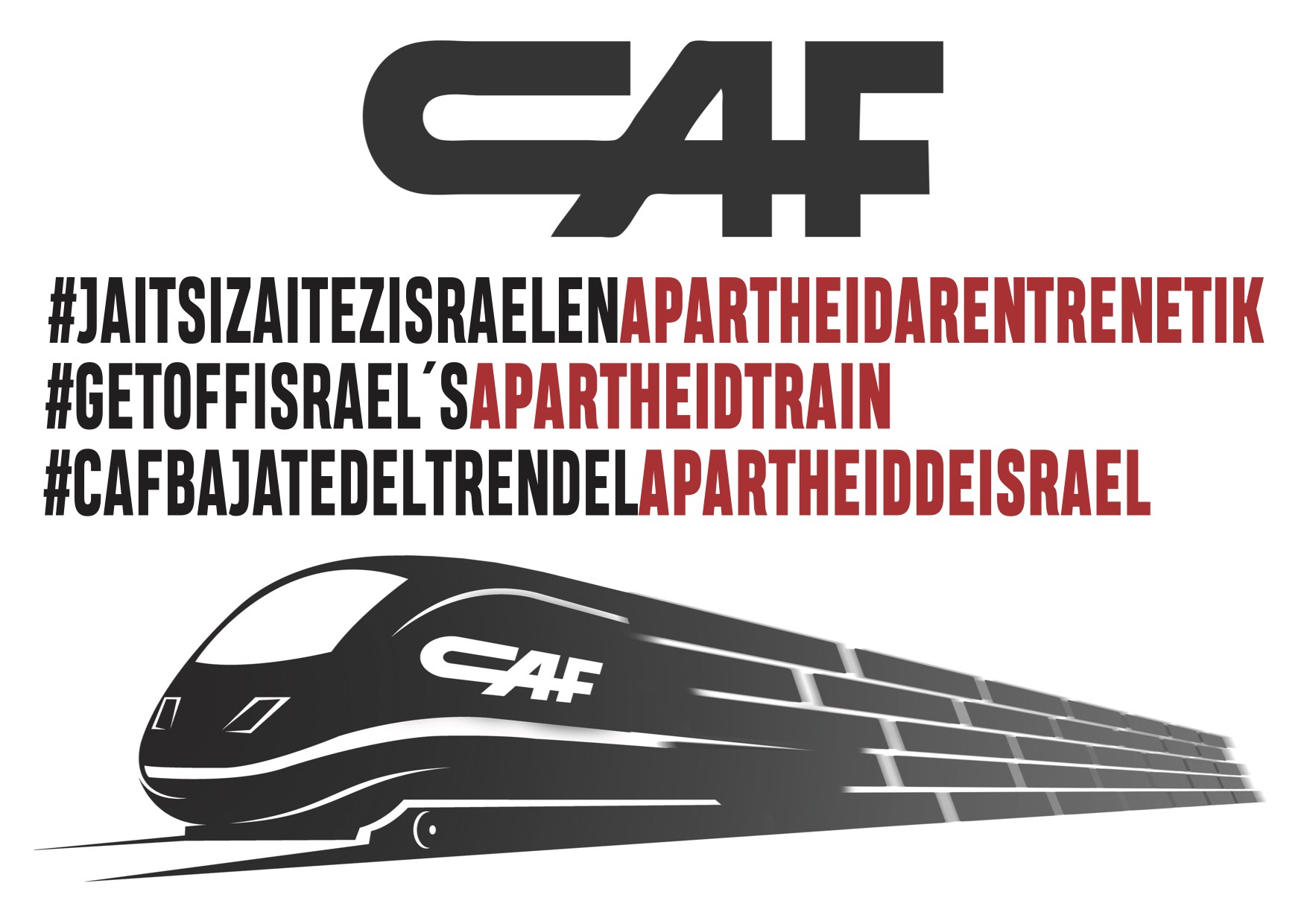 2. Take a photo of yourself holding the image

3. Share the photo on social media with this text:

Use the following hashtag: #CAFGetOffIsraelsApartheidTrain

Use the form on the right side of this page.

Contact the company by phone to request that CAF stop participating in the Jerusalem tram project. You can either call CAF’s headquarters at +34 943 88 01 00 or your local office listed here.

Simply follow the main points below, and please remember that the customer service helper is not responsible for CAF’s policy. Always be polite, but firm in asking that our message is passed on.

Here are the main points to bear in mind when making this call:

After calling, please fill out this form to let us know how the call went.

Send an email to CAF’s CEO

I’m writing ahead of CAF’s shareholders meeting to demand that CAF end its participation in the development and maintenance of the illegal Israeli Jerusalem Light Rail (JLR) project.

The JLR project is a key element in the Israeli authorities’ strategy to formalize the ongoing annexation of the occupied Palestinian territory and to deny the Palestinian people their basic rights under international law.

In 2016, the UN Human Rights Council called for the cessation of “the operation by Israel of a tramway linking the settlements with West Jerusalem, which is in clear violation of international law and relevant United Nations resolutions”.

The JLR itself represents  a tool of Israeli apartheid since its construction entails the forced expropriation of land and the destruction of Palestinian property. Its operation will benefit mainly the Israeli population, especially illegal settlers.

The new extremist Israeli coalition government has announced its intention to de jure annex significant parts of the occupied Palestinian West Bank from July 1st, culminating decades of illegal de facto annexation. The UN and the EU have condemned this decision and have restated the illegality of Israel’s settlements, which the JLR is intended to connect to West Jerusalem.

Shapir, CAF’s partner in the consortium which was awarded the contract, is on the list published by the UN in February 2020 of complicit companies involved in activities in the illegal Israeli settlements with which business relations should end.

CAF’s own code of conduct states that “all actions by CAF and those who represent it will scrupulously respect the law, human rights and public freedoms”. The code adds that “any entity or person who works for or has dealings with CAF should carefully observe current legal obligations, the code of conduct  and CAF’s internal regulations”.

In keeping with this code, the workers committee in the Beasain and Irun CAF factories publicly requested that the company withdraw from the illegal JLR contract.

The French company Veolia abandoned all its works for the JLR in 2015 after losing an estimated €20 billion in contracts and tenders following civil society campaigns aimed at pressuring the company to end its participation in this project.

We therefore ask CAF to immediately rescind its contract for the Jerusalem Light Rail. Participating in it damages CAF’s reputation and makes it subject to international boycotts and divestment campaigns by human rights and civil society activists.

For now, protests and public actions to expose CAF’s complicity in serious human rights violations will continue until CAF ends its involvement in Israeli apartheid and takes a stand against human rights abuse by ending CAF’s role in the illegal Israeli JLR project.