November 26, 2021
/ By
Palestinian BDS National Committee (BNC)
/
Palestine, Israel
This coming Monday marks the 43rd UN International Day of Solidarity with the Palestinian People. The best way to show real solidarity with Palestinians is to push for #UNinvestigateApartheid, here's why: 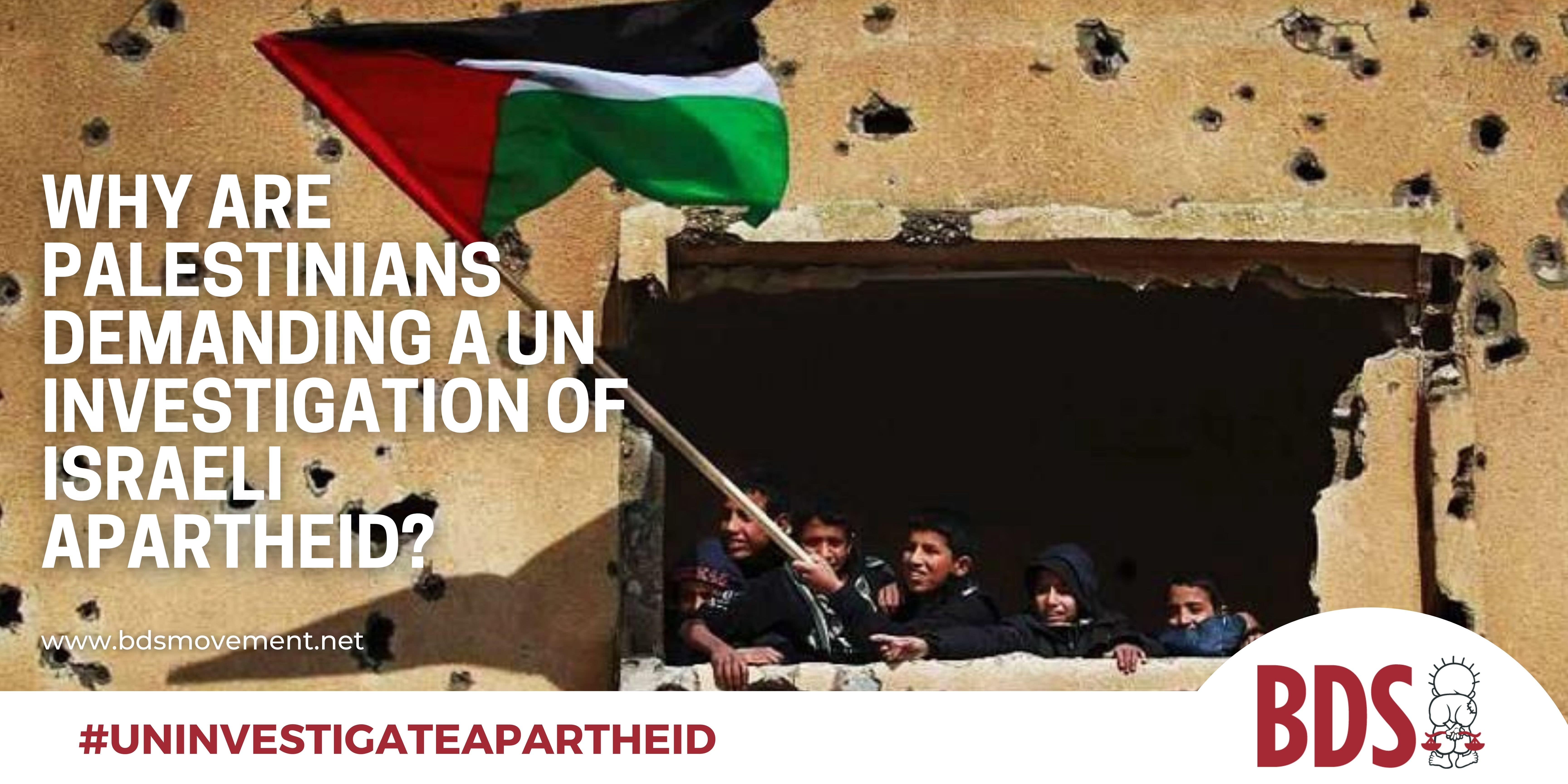 Apartheid is a crime against humanity. States and international organizations, foremost the United Nations, have a legal obligation to give no recognition or assistance to an apartheid regime, and to act to bring it to an end. Individuals responsible for the crime are to face prosecution and punishment by domestic courts or the International Criminal Court.

Under international law, apartheid consists of inhuman acts committed by an institutionalized regime of racial domination and systematic oppression for the purpose of maintaining that regime. For decades, Israel has practised apartheid against the Palestinian people.

Why the United Nations must investigate Israel’s apartheid:

Apartheid is the “deliberate imposition on a racial group of living conditions calculated to cause their physical destruction in whole or in part.

Israel’s indiscriminate and deliberate military attacks on Palestinian civilians, and its crippling siege of the occupied Gaza Strip, have been characterized as a prelude to genocide by UN human rights experts.

Apartheid is… the severe deprivation of the oppressed group of fundamental human rights and freedoms, calculated to prevent its development.

Israel's laws allow any Jewish person to enter and live in the entire country under its control, while depriving Indigenous Palestinian refugees of their right to return home.

Hundreds of Israeli checkpoints and roadblocks in the Occupied Palestinian Territory deny Palestinians their right to freedom of movement and residence.

Palestinians in the occupied West Bank live under draconian military rule while Israeli settlers in the same territory live under civil law with full rights.

An over 700 km long and up to 8 meter high wall cements the existence of segregated reserves or ghettos for Palestinians.

In the first half of 2021 alone, Israel demolished, seized or forced Palestinians to demolish at least 421 homes Palestinian-owned structures, in order to build more illegal, Jewish-only settlements.

Apartheid is … “Persecution of individuals and organizations because they oppose apartheid.”

Israel systematically smears, criminalizes and punishes human rights organizations and activists opposed to apartheid. It has just outlawed six of the most prominent Palestinian human rights and development organizations.

Israel's 2018 Basic Law describes Israel as “The Nation State of the Jewish People” and provides that the exercise of the right to self-determination in Israel is reserved for the “Jewish People”, and conveys constitutional status to the regime of settler-colonialism and apartheid that oppresses the Indigenous Palestinian people.

Human Rights Watch - A Threshold Crossed -Israeli Authorities and the Crimes of Apartheid and Persecution.

B'Tselem - This is Apartheid.

We call on the United Nations to:

Now is the time to #UnInvestigateApartheid